Focus on recovery, renewal and the future at Optometry’s Meeting® 2021 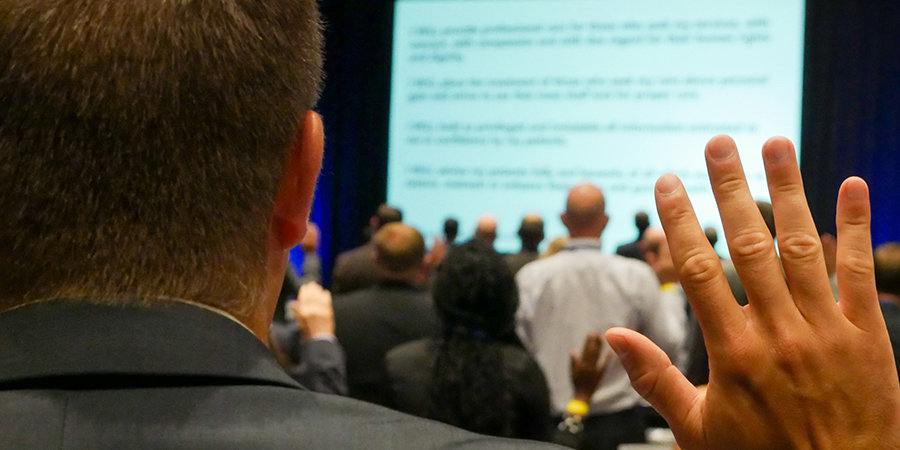 The past year has been like no other for optometry, AOA’s leadership said Thursday at Optometry’s Meeting®, yet the association, affiliates and members rose to the occasion, and even thrived in some ways, in difficult conditions.

In his address to members in Denver, AOA Executive Director Jon Hymes noted, after a much-awaited return to the profession’s premier meeting, the goal was to focus on recovery, renewal and the future. Yet, the Covid-19 crisis revealed two truths.

“No. 1: Doctors of optometry have made an important difference for our country through this year of historic crises,” Hymes said. “The second: Our organizations­—the affiliates and the AOA—have made an important difference for our doctors. Just as all of you adapted and overcame to deliver the safest, highest-quality care, the affiliates and the AOA adapted and overcame to live up to our mission: to advocate for the profession and to serve doctors of optometry in meeting the health and vision care needs of the public.

“The AOA and the affiliates helped optometry to answer America’s urgent call for help,” he added. “As a result, doctors of optometry and your essential role in the delivery of primary health care is—from coast to coast—a settled matter of enacted law, finalized regulation, emergency declarations, public health proclamations and community-by-community clinical reality. It is health-care fact, something I could not have said any of the 15 previous times I’ve been privileged to report to this House (of Delegates). In March of 2020, in the midst of the most far-reaching and deadly public health crisis in a century, doctors of optometry met the moment with knowledge, skills, compassion and courage that have defined the now accelerating pace of its advancement.”

AOA President William T. Reynolds, O.D., added: “Because of the hard work of a lot of people, AOA is coming out of the pandemic stronger than when we entered it.”

How did they do it?

Throughout the crisis, AOA leaders, doctors, staffs and partners showed their mettle, including Barbara L. Horn, O.D., and Dr. Reynolds, O.D., who served as AOA president during this time.

“... their love for the profession, their respect for colleagues, their great wisdom and experience, desire to serve and unparalleled command of optometry and its essential and expanding role in health care guided them in all that they did through historically uncertain times,” Hymes said. “Their leadership qualities shined through in every early morning, late-night phone call and in the countless crisis response meetings they led.”

‘Optometry in the vanguard’

Beyond talking about the separation of being off-planet, Dr. Linenger described the relative loneliness serving aboard Mir as the only American astronaut alongside his two Russian cosmonaut colleagues—a language barrier often frustrating their work. However, when master alarms began blaring one day and Dr. Linenger saw the faintest whisps of smoke, he had no trouble understanding his colleagues: “Fire!”

For 15 minutes, the Mir crew battled a blaze that threatened to breach the space station’s hull. It would come to be described as the most severe fire aboard an orbiting spacecraft to date. With the fire extinguished, Dr. Linenger and the crew stayed awake for 48 hours to monitor their vital signs before allowing themselves to sleep.

“One thing I’ve learned is that you’ve got to give it all you got, give it all your fight, but when that fire’s out, you need to leave it behind and get ready for the next challenge,” he told attendees. “COVID-19 was a challenge that you all can relate with—but it’s time we learn from it and press on to get ready for the next challenge, whatever it may be.”

In describing his homecoming, Dr. Linenger recounted the mental—and physical—toll of prolonged spaceflight.

Noting the shift in cerebral fluids from protracted weightlessness, astronaut’s globes may experience a flattening, which is why NASA’s doctors send various diopter-strength glasses on the spaceflight to counteract vision troubles. Dr. Linenger, in displaying a photograph of himself in front of his own recent retinal image at Johnson Space Center, couldn’t be more appreciative of the work that doctors of optometry provide.

“Optometry is truly in the vanguard of astronaut health,” Dr. Linenger said. “My hat’s off to you all. Astronauts have great respect for your profession and what you all do protecting our health long-term.”

In other events from Optometry’s Meeting, AOA awardees were honored and, for the first time, AOA volunteers gathered for the AOA Leaders Summit for a second time in 2021. The summit was initially held virtually in January.

Stay in the know by following Optometry’s Meeting social accounts on Facebook and Twitter, and watch for daily news updates from the profession’s premier meeting, posted at aoa.org/news. Get a feel for the buzz by following the official hashtag, #OM2021.

Immediate Past President William T. Reynolds, O.D., cuts the ribbon to signify the opening of the Exhibit Hall at Optometry's Meeting® 2021 in Denver, Colorado.

AOA members reunite in the Exhibit Hall at the 2021 Optometry’s Meeting® in Denver.

AOA Past President David A. Cockrell, O.D., speaking in the House of Delegates.

Belinda Starkey, O.D., receives the 2021 Optometrist of the Year award.

George Ballato, CPOA, receives the 2021 Paraoptometric of the Year award.

AOA volunteer Johndra McNeely, O.D., celebrates AOA successes of the past year with colleagues at the 2021 Leaders Summit kickoff event. AOA's dedicated volunteers, who typically gather once a year to chart a course for the future, are meeting twice in 2021. Committees came together in person at Optometry's Meeting to continue the work they started earlier this year.

A panel of AOA volunteers discuss the challenges and successes of 2021 during the 2021 Leaders Summit kickoff event at Optometry’s Meeting® in Denver.

Diversity, Equity and Inclusion Task Force Chair Jacqueline M. Bowen, O.D., provides an update on actions to help the AOA and the profession become more welcoming and inclusive during the House of Delegates at the 2021 Optometry’s Meeting®.

The AOA Board of Trustees recite the Optometric Oath as the AOA House of Delegates opens during the 2021 Optometry’s Meeting®.

The AOA is leading a yearlong dialogue on how the COVID-19 crisis is impacting the eye health of children across the country, and Optometry’s Meeting® attendees are learning the guidelines for managing a young population with prolonged device use.