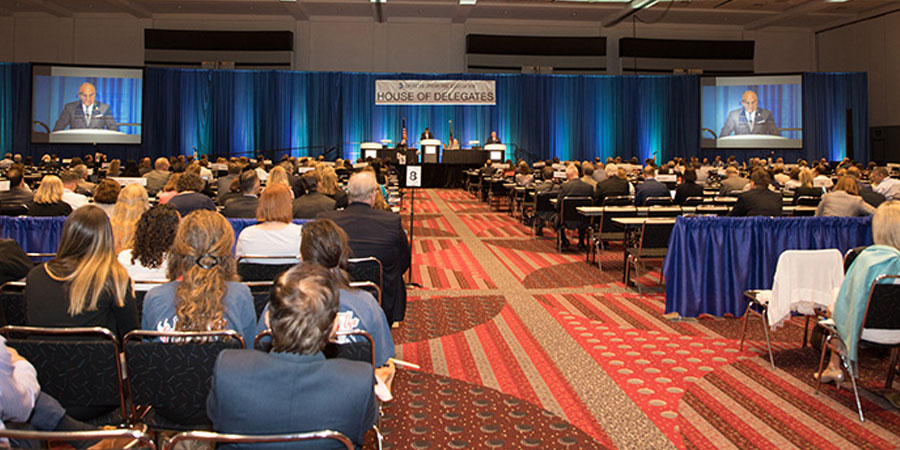 In his farewell address, outgoing AOA President Christopher J. Quinn, O.D., delivered and characterized the state of the AOA. His assessment: The AOA is strong and growing stronger.

"We've seen membership increasing," Dr. Quinn stated Saturday, ticking off a long list of AOA wins over the past year, as Optometry's Meeting® 2018 neared its closing. "We've had multiple advocacy victories on the state and federal level. We've had regulatory victories recognizing the importance of optometric care. We have a PR program that has never been stronger or more successful. And we have continued development of tools to enhance education research and support members."

But unprecedented challenges remain, he noted. There are threats to the profession and patient access to care on various fronts: from the regulatory side, from unscrupulous contact lens sellers online and from abuses by powerful vision plans.

Yet, Dr. Quinn said, the AOA won't yield to the threats, including those posed by our "David and Goliath" fight with the FTC over its unnecessary paperwork proposal, and will continue to uphold the standard-of-care­­­­­­ banner of comprehensive eye examinations.

"We'll fight to make sure nothing stands between the care you provide and the patients who need that care," Dr. Quinn said.

With the help of members, he added.

"At the end of the day, it's the value proposition of membership that drives the success of this organization," Dr. Quinn said. "I hope we've proven that value. It's been a highly productive, successful year. And we should feel proud of the achievements we've met this year."

The 121st AOA Congress adjourned Saturday, but not before delegates approved adoption of several resolutions. Of those resolutions, the House of Delegates voted to:

For the second consecutive year, Optometry's Meeting hosted an inter-professional, brainstorming, networking and collaborative competition known as a hackathon. Titled, "Hackathon IV: Artificial Intelligence & Care of the Diabetic Patient," the event brought together teams of residents, students, faculty, researchers and practicing doctors of optometry to examine how diabetic patients are currently cared for by optometry, ophthalmology, primary care providers, nurses, podiatrists and dentists.

Tasked with adapting artificial intelligence (AI) to improve patient outcomes for diabetic retinopathy, the hackathon's goal is to present a plausible model to the National Eye Institute (NEI) that might better diagnose and manage patients with diabetic retinopathy.

Session facilitator Thomas Wong, O.D., director of new technologies at State University of New York College of Optometry, described how AI is becoming an increasingly prominent part of our daily lives, and health care can adopt some of these lessons for better patient outcomes.

"We want to create a collaborative environment," Dr. Wong tasked attendees. "We're identifying opportunities and understanding the user experience to help us better understand these problems, and we're here for what's best for patients."

Catch up on everything Optometry's Meeting

Couldn't make it to Denver? Catch up on all the news that came out of Optometry's Meeting with AOA's daily news roundup at aoa.org/news, and follow the excitement at #OM2018 on AOA's dedicated social media page.