December 10, 2020
In an address to AOA’s House of Delegates Dec. 3, AOA President William T. Reynolds, O.D., described not only the challenges faced by members, but also how they persevered over the pandemic, social reckoning and a turbulent political season. 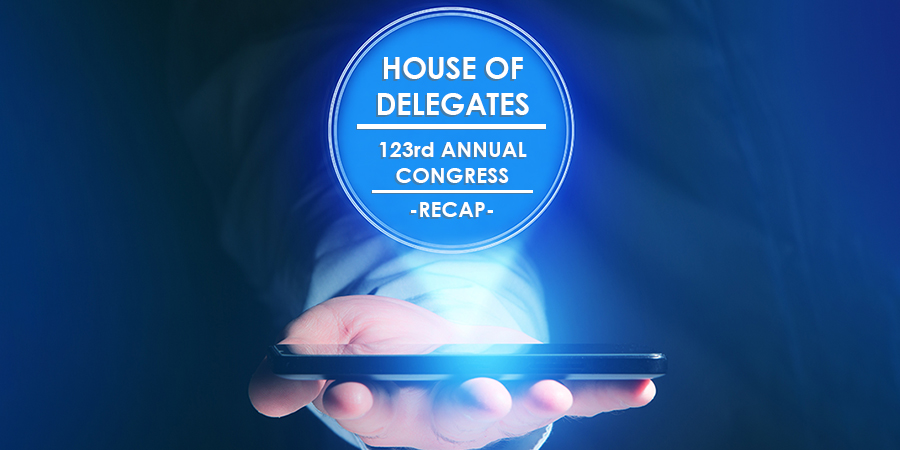 It was supposed to be optometry’s year—the Year of the Eye Exam. Then, in the blink of an eye, everything changed, and the AOA and affiliates quickly pivoted to ensure doctors of optometry were able to continue to provide much-needed and safe care to patients, Dr. Reynolds said.

“AOA has adapted, and we are now set to move forward and accomplish even more for the profession,” he said.

For instance, Dr. Reynolds reported that the AOA Board of Trustees worked quickly to identify short-term and long-term ways the organization could help set up doctors for relief and future recovery. In March, with the pandemic intensifying, the AOA and affiliates announced a crisis relief and recovery plan. The plan included:​

The AOA and affiliates have persevered in other ways, Dr. Reynolds said.

They have been relentless advocates for doctors, helping them qualify for government relief funds, as well as providing members and students with the resources needed to get through the crisis. “During the past several months, tens of thousands of doctors, both members and nonmembers, have joined AOA webinars covering a range of urgent, crisis-related concerns and used tools available on aoa.org/coronavirus,” he said. “This included critical information enabling doctors to secure ($1.69 billion) in relief funds.”

The AOA continues to remain an advocacy force in Washington, D.C., recently recognized among The Hill’s annual list of top lobbyists.

Doctors of optometry stepped up to provide essential care. In March, when the CDC issued guidance that suddenly limited doctors’ care to only urgent and emergent, doctors provided critical services to more than 206,000 patients in a one-month period.

“The care doctors of optometry provided significantly reduced overcrowding in emergency rooms all across the country,” Dr. Reynolds said. “We should all be proud of how the AOA and the entire profession responded during this time of crisis. With the possibility of an effective vaccine becoming a reality, AOA and our affiliates are working with state authorities to ensure doctors of optometry are fully recognized for their primary eye care provider role and included among the Phase 1a distribution of the COVID-19 vaccine.

He added, “We also recognize that doctors are well-positioned to increase the public’s access to these critical immunizations. While some states, such as Kentucky and California, permit doctors of optometry to provide vaccinations, the current public health crisis has prompted policy leaders to recommend that states evaluate and expand their health care teams with regard to providing vaccinations.​”

House of Delegates Speaker for the meeting, Samuel L. Pierce, O.D., noted that 2020 would go down in the AOA’s annals as one of its most difficult in the profession.

“Very few will ever appreciate the difficult work that fell on the shoulders of the AOA Board of Trustees,” says Dr. Pierce, who asked the House of Delegates to unmute and led them in a round of applause. “As a past president and a member of the American Optometric Association, you have my appreciation for all you’ve done.”

Under the good and welfare section of the agenda, the House of Delegates heard a resolution in recognition of the 50th anniversary of the Armed Forces Optometric Society and its founding members.

A number of members were announced as 20-21 candidates for the Board of Trustees, including Belinda Starkey, Arkansas, for trustee; James P. DeVleming, Washington, for president-elect; Ronald L. Benner, Montana, for vice president; Steven T. Reed, Mississippi, for secretary-treasurer; Jacqueline M. Bowen, Colorado, for trustee; and Teri K. Geist, Nebraska, for trustee.