May 20, 2021
AOA/AOSA Opportunities in Optometry Grants represent a concerted effort to not only build diversity, equity and professional leadership for the next generation of optometry, but also ensure expanded access to primary eye care throughout America’s communities. 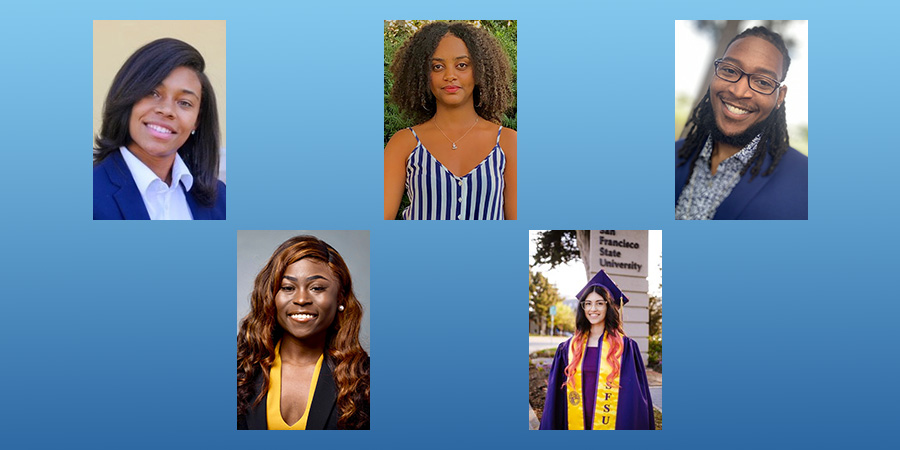 Five budding doctors of optometry from traditionally underrepresented minority groups within optometry were awarded grants to help defray the costs of applying to optometry school, to promote diversity and equity in the optometric profession for generations to come.

The awards were the first given under the AOA/AOSA Opportunities in Optometry Grants program announced in January. Supported by Optometry Cares ®—The AOA Foundation , the grants are a one-time stipend awarded to students from traditionally underrepresented minority groups within optometry. A collaboration between the  AOA Diversity and Inclusion Task Force and the AOSA Diversity Project Team, the grants represent a concerted effort to not only build diversity, equity and professional leadership within the professional but also contribute to growing access to primary eye care throughout America’s communities.

The grant program’s selection committee weighed several factors in choosing this first round of recipients, says Chair William Jackson, O.D. Beyond being members of an underrepresented minority group, among other criteria met and exceeded by applicants were:

“Data indicates the numbers for URMs (underrepresented minorities) have not increased on pace with other demographic groups in the U.S.,” Dr. Jackson says. “By relieving some expenses and making a concerted effort to acknowledge and identify these barriers when applying to optometry schools, we believe it will help increase the number of URM applicants, thus beginning to move the needle to be on pace with other demographic groups.”

For the grant process, applicants were asked to write about why they believe it is important to increase the number of underrepresented minority groups in the field of optometry. Here are excerpted responses from the first round of grant recipients:

Awareness and education on health care in marginalized communities are just two of the benefits of diversity in optometry, Brown writes in her essay.

“These benefits include a comfortable space to serve the underrepresented. Working as an optometric technician in the clinic of a black doctor has given me insight into the significance of a comfortable space for minority patients. The comfort of the patient affects the trust that they have in the doctor. Another result of diversity in the field of optometry is education. Educating these communities about eye health brings awareness to other diseases that largely impact them, such as diabetes, hypertension and obesity. Statistics show minorities are at higher risk of getting diabetes than white Americans. Diabetic retinopathy is a result of diabetes, or uncontrolled blood sugar, and is the leading cause of blindness. Some minorities are either undiagnosed or unaware of the effects of blood sugar on the eyes, but more representation in the field of optometry could result in counseling or preventive care. There are many benefits of increasing the number of minorities in the field of optometry, all of which sparked my desire to serve the underserved through eye care as a minority.”

Demissie calls it a “mismatch”—the number of underrepresented minorities in optometry vs. the number of minority patients. Bringing in doctors of optometry from different backgrounds can generate different ideas, which can be shared with their colleagues and patients.

“This will enhance the process of providing better care to the patients and also help optometrists to be understanding of their patients’ needs,” she writes. “Diversity also creates a welcoming environment for both parties, making it easier to open up and share their perspectives. Additionally, increasing the number of underrepresented minorities will lead to better health care as the optometrist will understand their patients’ belief system and values while reducing biases.” She has taken it upon herself to help overcome optometry’s challenge of diversity. She has been working as a student ambassador for Black EyeCare Perspective. She also has had the opportunity to attend summer programs, such as Improving Diversity in Optometry Careers at The Ohio State University College of Optometry. These opportunities helped her “understand the role of diversity in optometry to overcome health disparities,” she concludes. “Thus, I was and will be able to spread awareness among my peers and classmates about the educational opportunities and careers in the eye care world.”

“In all areas of health care, the percentage of doctors who are Black or African American is very small. Moreover, the eye care industry is in great need of more African American representation. The U.S. Census reports that 13% of the population identify as African American. However, approximately 3% of optometry students identify as Black or African American and, likewise, less than 2% of practicing optometrists. This is an alarming statistic, and research has proven that if you are Black in America, having a doctor who looks like you increases the quality of the care received and is often the difference between life or death, blindness or sight. In recent media, Dr. Mehmet Oz launched the #moreblackdoctors initiative to raise awareness about racial bias in hospitals, and billionaire Michael Bloomberg established grants at four historically Black medical schools to address the shortage of Black doctors. I’m impelled to become a pillar of my community and an influential ambassador for more black students to gain exposure and consider a career in optometry. As a young, Black male and a future optometrist, I must say this is one of my main goals. I’m currently the vice president of the Black EyeCare Perspective Pre-Optometry Club, where I network with Black students pursuing careers in optometry. Representation matters—period.”

Laws writes about living out diversity and how it can advance the profession.

“Eyesight is one of our senses that needs to be taken care of, and through furthering my education, I want to ensure that people in all communities or backgrounds have access to a great optometrist,” she writes. “I am currently the vice president of the pre-optometry club and will be running for president on the platform I.See.U. This represents seeing all members as important and creating a welcoming space to grow with one another and learn about the optometry field. Furthermore, as a technician, I work in a very diverse office. Our office represents multiple genders and racial ethnicities while providing excellent service. Through a great experience, our customers have the opportunity to see multiple people of different backgrounds work together effectively. It's important to increase the number of underrepresented minorities in the field of optometry to expand the perspective and knowledge overall. Different people can bring a variety of experiences to the table and help the field advance to new heights.”

Quintero seeks to bridge the gap between marginalized communities and the profession.

“I believe that having diversity within every field of work is essential for a successful company or program,” she writes. “Specifically, among the field of optometry, underrepresented minorities can allow for different points of view, which creates quality care. Optometry is a career that consists of both psychology and physiology in such that verbal communication is essential for treating the patient. There needs to be a form of patient-to-physician trust to provide this quality care. I feel as though having underrepresented minorities in the field of optometry can bridge the gap among this disconnect. As I pursue my career goal of optometry, my purpose is to be able to help people of similar marginalized communities as I. As a student of San Francisco State University (SFSU), I was nominated for the PALS program on campus. This program stood for Peer Assistants for Learning Science, which was created for the promotion of equity and inclusion of minorities among the STEM courses at SFSU.” Partnered with a biology professor and getting students’ feedback under PALS, they worked together to create an inclusive environment in the classroom.

Through the work of the AOA’s Diversity and Inclusion Task Force and the AOSA Diversity Project Team, optometry’s advocates are listening closely to colleagues nationwide to ensure optometry leads in engaging and encouraging a diverse, equitable profession going forward. Opportunities in Optometry grants are an integral part of the sustained commitment necessary to affect change, and members’ and organizations’ support in this mission is welcomed.

Here are two ways to support the program: