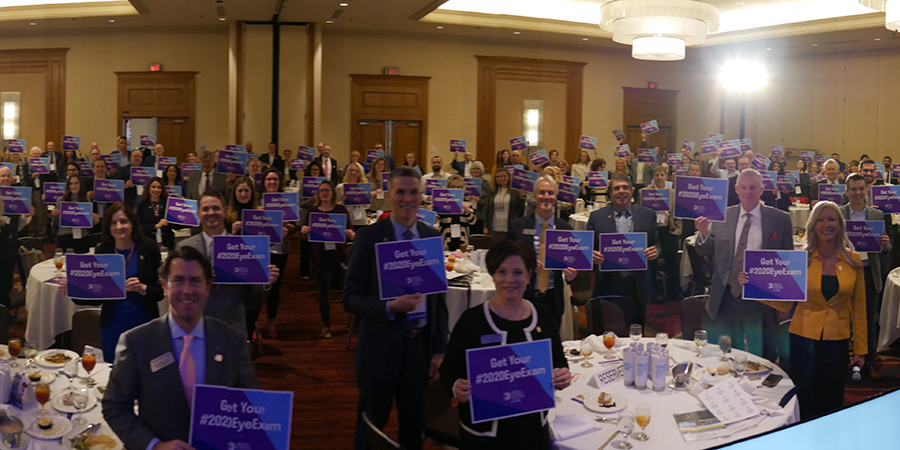 Championing the AOA's vision to make 2020 the "Year of the Eye Exam," optometry's leaders doubled down on the concerted campaign by enlisting scores of employers reaching more than 15 million Americans and counting.

Convened at AOA's Leaders Summit in St. Louis, Missouri, Jan. 31 to Feb. 1, over 220 AOA volunteers answered a challenge from AOA President Barbara L. Horn, O.D., to actively engage local and regional employers in the #2020EyeExam campaign. And, optometry's leaders delivered in a big way. In less than two days, the determined efforts of these doctors of optometry, students and paraoptometrics helped grow the total number of employers taking the 2020 Employer Pledge to 50 organizations that account for nearly 375,000 employees and collectively reach more than 15 million member individuals.

Through the Employer Pledge initiative, America's visionary employers commit to expanding understanding and support for eye health among their employees, as well as reminding them of the importance of annual comprehensive eye exams by AOA family doctors of optometry. Only one month into the #2020EyeExam campaign, the pledge already features some of the biggest names in the health care industry, as well as other instantly recognizable national brands, such as EyePromise, Domino's, National Down Syndrome Society, Farmers' Almanac and the National Consumers League.

"The AOA is hard at work to bring this year-long campaign to life," Dr. Horn said at Leaders Summit. "This is an epic year—we are starting a movement into the future about the importance of an annual, in-person examination with an AOA doctor of optometry."

That movement took a big stride only hours into Leaders Summit when Dr. Horn proudly announced to volunteers' applause that the American Bankers Association, a trade association representing banks of all sizes and their two million employees nationwide, had joined the pledge to encourage employees' routine eye care. So, too, pride in the Employer Pledge was evident from industry leaders' remarks throughout the meeting.

Dr. Horn acknowledged that optometry's leaders will be the ones to take the #2020EyeExam to the next level and encouraged the entire optometric community to get involved, engaging local businesses in the Employer Pledge. That's precisely what the North Carolina Optometric Society (NCOS) accomplished by engaging employers statewide, starting with their existing business relationships.

"We came up with a list that includes the society's internet and phone provider, accountants, law firms, our print and marketing solutions provider, and property management company—just to name a few—then started reaching out," says Paul Kranze, NCOS associate executive director. "We've had success recruiting some of these employers because of the personal relationships we have with them."

So, too, the Nebraska Optometric Association (NOA) partnered with the Nebraska Chamber of Commerce & Industry and local chambers of commerce statewide to encourage employers to sign the Employer Pledge. The NOA call to action reinforced that vision loss or impairment among working-age adults can cost $23.8 billion in lost productivity annually.

"NOA will provide employers with resources they can share within the business or organization that will communicate the importance of including an annual in-person, comprehensive eye exam into employees' overall health and wellness checkups," noted Andrew Bateman, O.D., NOA president.

But the Employer Pledge is just one facet of the AOA's multipronged #2020EyeExam campaign that activates all Americans to make 2020 the year to schedule their in-person, comprehensive eye exam with their AOA family doctor of optometry. Additionally, the 2020 campaign includes a concerted public awareness and media campaign, comprehensive outreach and education to physician colleagues about the primary eye health care that doctors of optometry deliver, and continued work through the Future Practice Initiative to update scope of practice laws that modernize optometry and expand access to care.

"The AOA is at the ready to think and deliver big for you, and we look forward to our continued partnership as we bring new and exciting campaigns to life in 2020 and beyond," Dr. Horn said. "We are charging ahead."

That kind of dynamism parallels the determination that AOA puts into advocacy challenges facing the profession, to which Dr. Horn also addressed at Leaders Summit.

Of pressing concern is a U.S. House-passed proposal to expand Medicare dental, hearing and vision coverage that the AOA fears would create an underfunded, unworkable new vision benefit. While AOA's Federal Relations Committee and staff have actively engaged legislators to improve the bill over the past few months, the legislation still needs work as it goes before the U.S. Senate.

Known as the "Lower Drug Prices Now Act," H.R. 3 contains a provision to create new Medicare coverage for refraction and contact lens fittings, only every two years, while providing seniors with an eyeglass and contact lens benefit. Throughout, the AOA repeatedly emphasized the importance of optometry's essential and expanding physician role and the need for annual eye exams among seniors, while also stressing that the proposed expansion without sufficient physician reimbursement and materials coverage levels could restrict access and undermine the doctor-patient relationship.

Now before the Senate, the bill is unlikely to pass in its current form. However, recognizing that any proposal may serve as a basis for future legislation, the AOA continues to educate all senators on specific provisions that would make this bill unworkable.

"Right now, chances are slim for the Senate to take up the House bill; however, something will likely be done on prescription drugs in 2020 and we will remain vigilant," Dr. Horn said.

Vigilance is also key when it comes to veterans' care issues as the Department of Veterans Affairs (VA) mulls changes to the current standard of care. Chiefly, the VA continues to move forward with an experimental Technology-based Eye Care Services (TECS) program that the AOA, the Armed Forces Optometric Society and leading veterans service organizations have decried as subpar care for years.

Further suspicion mounted recently when not only the AOA confirmed TECS costs veterans a $50 copay—unlike a fully-covered, in-person, comprehensive eye exam from an eye doctor—but also the program's creator—an ophthalmologist—took to an optometric publication to drum support. That publication issued an apology for running the piece and the AOA will rebut it in a forthcoming issue.

In setting the stage for another potential advocacy challenge, Dr. Horn noted that up for VA consideration is renewal of a policy that bans doctors of optometry from performing laser procedures, despite their respective scope of practice acts. That fight might still be months away, but the AOA is closely monitoring any developments.

With 25 cosponsors and a Senate version nearing completion, H.R. 3975 came under attack in several news outlets recently when the president of "Citizen Outreach," a group backed by online contact lens sellers, accused doctors of limiting competition. Despite having already been exposed for playing a role in a 'pay-to-play' media advocacy racket, online sellers are trying to divert attention away from their unscrupulous business practices and encourage the FTC to finalize a Contact Lens Rule proposal that would harm eye care providers.

Toward that end, the AOA continues to pressure the FTC over this Contact Lens Rule revision, including an FTC meeting later this month to discuss these concerns.

"Your AOA is continuing this three-year-long fight against the FTC's burdensome and costly proposed requirement for all doctors of optometry to obtain and store signed acknowledgment forms—our advocacy efforts have so far blocked this proposal from being finalized, and we are using every opportunity possible to meet with FTC leadership," Dr. Horn said.

Help support AOA's advocacy priorities by visiting the AOA's Legislative Action Center and seeing what campaigns you can assist, or by contacting the AOA advocacy at advocacy@aoa.org. To access the Action Center directly from your mobile device, text "AOA" to 855.465.5124.

So, too, Dr. Horn apprised volunteers of the AOA's efforts to hold plans accountable under the law and ensure the full recognition of optometry's essential, expanding role in health care. Namely, Dr. Horn cited the AOA's recent third party advocacy to the Centers for Medicare and Medicaid Services in light of newly restrictive approaches to access being followed by Medicare Advantage plans, as well as various issues originating from specific plan actions, such as Aetna's decision to automatically downcode certain claims.

Doctors aware of discrimination or other harmful actions or policies by insurers can report plan abuses to the AOA at stopplanabuses@aoa.org.

"Whenever these abusive plan practices get in the way of the care our patients need and deserve, it's the highest priority to ensure that optometry's concerns are heard loud and clear," Dr. Horn said.

Follow aoa.org/news for updates on priority initiatives coming out of Leaders Summit in the weeks ahead.