July 17, 2019
Only united under our common cause will optometry be recognized for the future-focused role in American health care. 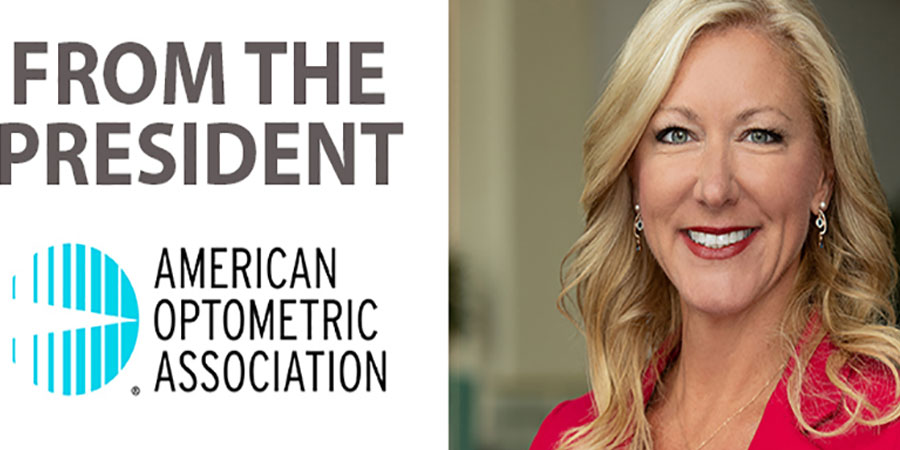 Excerpted from the July/August 2019 edition of AOA Focus.

One profession. One voice. One AOA.

Together, we will move optometry forward—not as individual doctors, students or educators; not as separate and factious groups or societies; not as the politically indifferent or averse. Only united under our common cause will optometry be recognized for the future-focused role in American health care that our patients need, and we know we're able to provide.

As I respectfully take the next step in AOA leadership, I'm committed to not only keeping AOA's foot on the gas when it comes to our vital advocacy efforts, such as AOA's Future Practice Initiative, but also engaging our membership in how we're advancing our great profession. The many challenges facing optometry aren't going away anytime soon, yet as I assume AOA's presidency, I can assure you that your AOA and state associations have never been so well-equipped to handle whatever trials come our way. And that's exactly one of my priorities for this most propitious year, 2020: engaging doctors of optometry—wherever they're at, however they need to hear it—about how the success of our profession is the responsibility of every one of us.

This year, AOA is launching an effort to engage local optometric societies and academia in a way that's never been done before. Throughout 2019-2020, the AOA's Board of Trustees meetings will take place on the campuses of our schools and colleges of optometry nationwide, where the entire board will have the opportunity to interact even more with presidents and deans, faculty and students. So, too, we're working with affiliates and optometric societies on this hyperlocal level of engagement. We're encouraging the profession to get involved and take ownership of this course that we're charting for a better tomorrow.

Change is in the air. The Future Practice Initiative, a concerted and historic effort to advance states' scope toward medical eye care, has met early success in legislatures nationwide despite fervent opposition. We won't let up. Backed by your energy and participation, together we're going to take 2020 by the horns and shape the future of this profession.

Because together we're one AOA.