Optometry’s Meeting® gets down to business, crowns champions 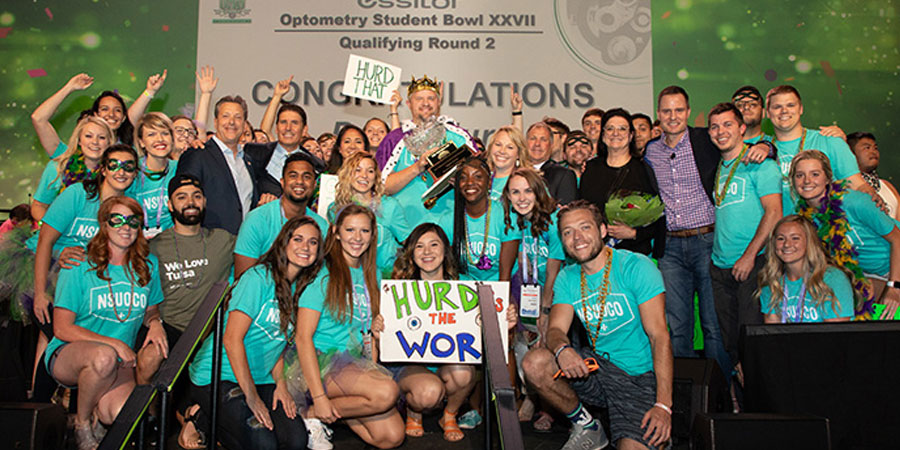 Here's a rundown of day 2 at Optometry's Meeting:

The 121st AOA Congress was called to order Thursday by Immediate Past President Andrea P. Thau, O.D., as affiliate delegations settled in to discuss and vote on business matters of the association, including reports from AOA, industry and coalition partners.

Jon Hymes, AOA executive director, introduced reports on AOA initiatives and priorities, and provided a year-end summary of association activities since last House of Delegates. Hymes noted a year of sweeping public awareness of comprehensive eye exams and the importance of optometric care, as highlighted by AOA's efforts positioning doctors of optometry as public eye health resources during the August 2017 solar eclipse and throughout the year.

But that eye health and vision care message was challenged by some online retailers and mobile apps that peddled confusing, misleading messages designed to bolster their company bottom lines at the expense of an established standard of care. Hymes noted AOA, member doctors' and students' efforts to continue that public health education effort during the ongoing Federal Trade Commission (FTC) Contact Lens Rule review, during both the FTC's contact lens workshop and 2018 AOA on Capitol Hill.

"The AOA as a relentless, nationwide force for vision and health, as a battle-tested advocacy organization that's rewriting and replacing outdated laws, regulations, attitudes and even biases, as a unified federation of state associations committed to upholding the highest quality of patient care, as a professional association seeking to promote value to our members, we strive 24/7/365 to have an outsized impact," Hymes said.

"Here's to another impactful 12 months for AOA and state associations. There's more work to do, and we can't wait to get started."

In other news, the Health Care Alliance for Patient Safety (APS) provided an update on the advocacy activities of the new eye care industry collaboration. The APS, a policy and information collaboration between leading eye health advocates, including AOA, Johnson & Johnson Vision, CooperVision, VSP and Sightbox, seeks to support policy solutions that safeguard public health and heighten awareness of the doctor-patient relationship.

Deanna Alexander, O.D., APS chair, noted APS' advocacy activities in 2018 have focused on educating policymakers and regulators on the FTC's review of the Contact Lens Rule, and the patient health and safety considerations of contact lenses. Additionally, APS supported advocacy activities that bolstered the doctor-patient relationship in Congressional briefings, and state and federal legislation.

"It is our job to remember that consumers are patients and that policies affecting contact lenses can have negative outcomes that permanently impact their most precious sense of vision," Dr. Alexander said. "It's our job collectively to do whatever we can to minimize that risk."

One year after announcing launch of the AOA Health Policy Institute in Washington, D.C., Steven A. Loomis, O.D., HPI director, updated delegates on the priority issues that the policy analysis group addressed since 2017, including fact sheets and issue briefs on vision screenings, vision care access and other mainstream health care issues. Dr. Loomis noted how the HPI will continue publishing research-grounded insights and resources in the coming year on subjects that will help advance optometry and patient care.

"All this is the name of advocacy to help advance our profession," Dr. Loomis said.

Barbara L. Horn, O.D., AOA vice president, offered delegates a report on AOA's public awareness campaign to promote the value of regular, in-person, comprehensive eye examinations and doctors' of optometry vital role in delivering that care. Dr. Horn emphasized that though three-quarters of Americans know they should have an eye exam, only half visit an eye care professional yearly. That said, 9 in 10 Americans trust doctors of optometry for accurate and reliable eye health information, she notes.

"Americans overwhelmingly trust us for their eye health information," Dr. Horn said. "We are working hard to maintain that trust, get the information out and put actionable solutions into patients' hands."

To that end, in the year since the 2017 Optometry's Meeting, AOA was mentioned in nearly 5,000 articles and broadcast segments that reached more than 3.4 billion people. But this outreach is just setting the stage for a "once-only moment in time, which optometry is uniquely poised to own"—the year 2020.

Dr. Horn announced that AOA will roll out an integrated awareness campaign to educate and inform the public about eye health and exams in the propitious year, including a critical partnership with the Think About Your Eyes Campaign. On the one hand, the 2020 campaign aims to mobilize the profession in examining emerging issues, creating opportunities for discussion and determining actions needed to address future needs of the profession; while on the other, the campaign will magnify AOA's existing, successful public awareness campaign to educate about the importance of eye care.

"2020 is the year we will elevate optometry's voice to an even greater level through public relations activities," Dr. Horn said. "Our year is coming and we are poised to take it on."

Think About Your Eyes, in partnership with AOA, is the public awareness campaign that continues magnifying the importance of regular, in-person, comprehensive eye examinations and optometric care, and is coming off its biggest year yet. Dr. Loomis, Think About Your Eyes campaign chair, announced that the ad campaign generated more than 3.4 million eye exams and $752 million in industry revenue in 2017 alone.

"We've had a tremendous impact on the market, in our offices and most importantly on the health of Americans," Dr. Loomis said.

Dr. Loomis concluded by announcing 43 state associations and the Armed Forces Optometric Association have joined Think About Your Eyes as leadership partners.

Dr. Planitz was named Advocate of the Year for her tireless commitment to ensuring that doctors of optometry are lead voices in advocating for progress in advancing patient eye health and vision care throughout her tenure as AOA FLAKC chair.

"Her commitment to, and enthusiasm for the program, doesn't stop with seeing patients in the office," noted Joseph Mallinger, O.D., Optometry Cares®—The AOA Foundation president. "She actively promotes the program and educates her community to the critical value of early eye care for young children."

And the trophy goes to...

David Hurd of Northeastern State University Oklahoma College of Optometry hoisted the coveted crystal trophy in victory Thursday night at the 27th annual Essilor® Optometry Student BowlTM. The "Spirit Award," honoring the school with the most energy, greatest costumes and flashiest entrance, was captured by Southern California College of Optometry. The highly competitive, high-speed test of optometric intellect is one of the highlights of Optometry's Meeting, drawing cheering crowds of students and alumni alike.

Couldn't make it to Denver? Catch up on all the news that came out of Optometry's Meeting with AOA's daily news roundup at aoa.org/news, and follow the excitement at #OM2018 on AOA's dedicated social media page.