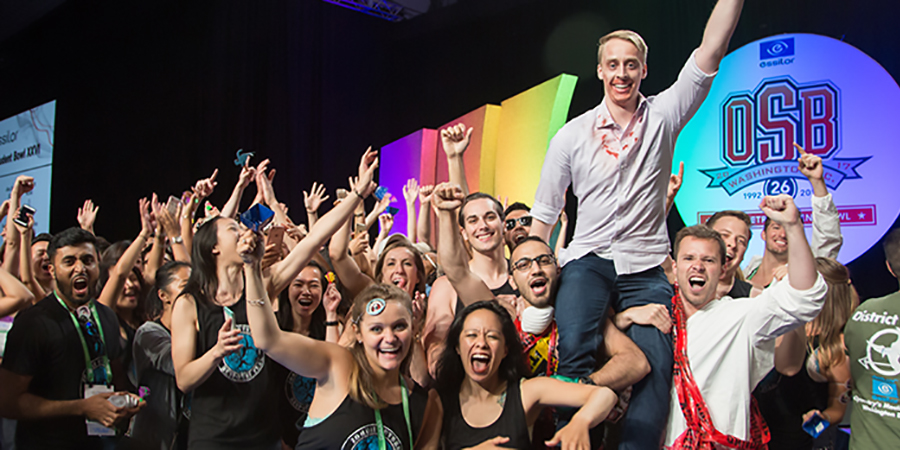 While fanfare characterized the first day of Optometry's Meeting® in Washington, D.C., day 2 was about getting down to business with a full day of continuing education (CE), seating of the profession's policymaking body and crowning a champ.

The 120th session of the House of Delegates was called to order by AOA Immediate Past President Steven A. Loomis, O.D., on Thursday as affiliate delegations settled in to discuss and vote on business matters of the association, including updates from AOA and industry, and recognition of special guests.

In her year-in-review address, AOA President Andrea P. Thau, O.D., told delegates that AOA made incredible strides this past year in informing legislators and influencers about optometry's priorities, and educating the public about eye health, vision care and the importance of the doctor-patient relationship. These advocacy efforts include:

"At a moment when everything in the health care policy landscape is changing and our Senate is deciding its future direction, there is no better time than now for doctors and students to make sure that that our frontline and expanding role is understood and that our priorities, focused on protecting the doctor-patient relationship, are front and center," Dr. Thau proclaimed.

"It has truly been an honor to serve as your AOA president," Dr. Thau said. "I couldn't have done it without you because we are truly better together."

Since the beginning of the year, more than 6,700 doctors have enrolled in the AOA member benefit, in addition to the 5,500 who enrolled in 2016. That rush in enrollment precipitated an expansion of AOA MORE information and resources, including materials related to the new Merit-based Incentive Payment System (MIPS). A forthcoming resource, the MIPS: Guidebook, will offer doctors a checklist for both EHR and non-EHR users in meeting MIPS requirements.

AOA MORE offers not only an easy-to-use dashboard for navigating MIPS requirements, but also actionable data on quality performance among the profession. This data is crucial for advocating for optometry, Dr. McCarty says, and therefore all AOA members are encouraged to enroll.

Throughout the House of Delegates' morning agenda, several notable special guests were welcomed onto the stage and presented AOA awards. Taking time out of their busy schedules, Rep. Cathy McMorris Rodgers (R-Wash.) and Bennie Thompson (D-Miss.), and Sen. Cory Booker (D-N.J.) delivered messages that hit home to delegates, discussing the importance of eye health and vision care services and their own personal intersections with optometry. Rep. McMorris Rodgers was presented with the AOA Presidents' Award, while Rep. Thompson and Sen. Booker were presented with AOA Health Care Leadership Awards.

Dorothy Hitchmoth, O.D., of the Armed Forces Optometric Society, and Jeffrey Sonsino, O.D., AOA Contact Lens and Cornea Section (CLCS) chair, were both named 2017 Advocates of the Year. Presented by David A. Cockrell, O.D., AOA Advocacy Group Executive Committee chair, the Advocate of the Year award recognizes AOA members for their exceptional efforts to advocate for the profession.

Optometry's expertise positions the profession at the forefront of efforts to better understand and control myopia's development. That's why Optometry's Meeting hosted an international forum to discuss the growing epidemic.

Taylor Harris of Illinois College of Optometry hoisted the coveted crystal trophy in victory Thursday night at the 26th annual Essilor Optometry Student BowlTM. The "Spirit Award," honoring the school with the most energy, greatest costumes and flashiest entrance, was captured by University of Missouri-St. Louis College of Optometry. The highly competitive, high-speed test of optometric intellect is one of the highlights of Optometry's Meeting, attracting cheering students and alumni alike.