June 20, 2019
Don’t miss out on what’s happening from the profession’s premier meeting, including the latest news from AOA Congress, the Student Bowl crowns a champion and more. 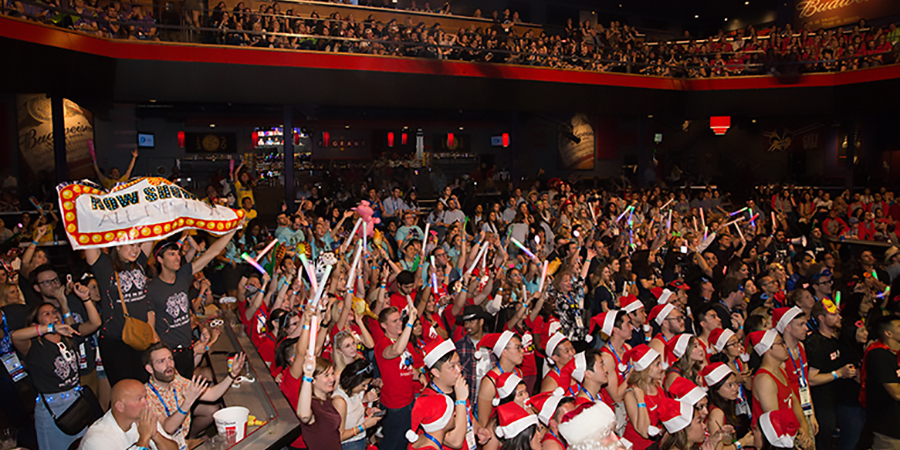 Optometry's champions come in many forms, from the profession's leaders and advocates in the 122nd AOA Congress to the newest installment of optometric hall of fame luminaries and crowned victors of the 28th annual Student Bowl. If the kickoff to Optometry's Meeting® was all about the warm welcome and laid-back fun of the host city, St. Louis, then day two was all about business.

Firebreathers, aerialists, stilt walkers and a giant, blue bear—the AOA/AOSA Block Party took on a veritable carnival atmosphere as more than 1,000 attendees kicked off Optometry's Meeting in a laid-back, family-friendly setting Wednesday evening. The reconfigured opening ceremony and 2019 AOA Awards presentation was like none other with all the vibes of a backyard summer party, right down to the location on the lawn of the AOA's and AOSA's headquarters.

"This is optometry's homecoming, being here on AOA's campus is a first for many of our attendees," announced Samuel D. Pierce, O.D., AOA president, in a welcome address. "More than anything, standing here fills me with a strong sense of pride in being a doctor of optometry. I am so grateful to have been given the opportunity to serve our great profession as AOA president over the past year. It's been my privilege and a great honor to have been entrusted to lead the AOA.

"But, this evening is about recognizing and celebrating your fellow optometrists who've given so much of their time and talent to advocate for our profession and serve the public."

Watch a snippet from the AOA Awards video.

AOA Congress gets down to business

On Thursday, the 122nd AOA Congress convened with nearly 470 delegates representing all 54 affiliates and sections nationwide. Optometry's preeminent assembly of leaders and decision-makers working toward the advancement of the profession, the House of Delegates spans three days this year for discussing and voting on business matters of the association.

Brought to order by Immediate Past President Christopher J. Quinn, O.D., the House of Delegates began with the traditional opening flag ceremony and optometric oath before launching into the President's Report from Dr. Pierce.

"Over the past year, armies of the profession's advocates have been hard at work, diligently championing to update laws that will allow Americans to receive full access to the primary eye care services they need and desire," Dr. Pierce said, nodding to the AOA's Future Practice Initiative and helping bolster states' scope of practice efforts.

While that work has only just begun, lobbying organizations are already taking great pains to disrupt this forward progress. Most recently, Arkansas' scope of practice expansion came under attack before the governor's signature had hardly dried, Dr. Pierce noted. This and other attacks—in legislatures and the media—against increased optometric scope of practice are why Dr. Pierce committed AOA's State Government Relations to continue support of scope modernization into 2020 and beyond.

"We all know, our fights don't end in the states, but happen in our nation's capital every day," he said. "We are moving swiftly to advance our priorities."

Dr. Pierce cited AOA's meetings with the U.S. Surgeon General and leading veterans' organizations about the importance of high-quality, comprehensive eye exams and optometric care, as well as the prolonged Federal Trade Commission (FTC) rulemaking process to the Contact Lens Rule. Additionally, he attributed a strong keyperson network for helping to act swiftly and advance priorities on Capitol Hill, and a heightened, "always on" media advocacy that helps ensure the profession "outpunches its weight."

Building upon Dr. Pierce's comments, AOA Executive Director Jon Hymes provided his state of the association address to delegates and led off by commending affiliates on the level of coordination amongst themselves and AOA. These relationships, "closer than ever before," could be even greater, Hymes noted, as he announced a "checklist" of offerings that AOA has available to bolster advocacy and membership.

So, too, Hymes said AOA member benefits have never been more valuable with the products and services offered by AOAExcel®; the clinical and practice resources afforded by AOA's evidence-based clinical practice guidelines, AOA MORE registry, a soon-to-be-released and modernized, AOA EyeLearn, and the Paraoptometric Resource Center; and the advocacy resources for advancing the profession, including the AOA Health Policy Institute and AOA Council on Research.

Additionally, Hymes noted that AOA's advocacy is at the top of its game, especially with rollout of the Future Practice Initiative. Despite massive and unprecedented pushback from organized ophthalmology, affiliates are making ground expanding optometric scope of practice in their states. And, to support these efforts, Hymes announced a landmark report from Avalon Health Economics that makes a detailed case for optometric scope expansion.

"This report details the tremendous beneficial impact across the health care system that doctors of optometry practicing at the full extent of their education and training will provide," Hymes announced.

He continued: "We know the stakes are high and given how much this organization, the AOA and affiliates, have achieved in the last 20 years and more, now documented and spelled out in this report, we can see the profession's future depends on our successes."

Concluding the House of Delegates' Thursday session, David A. Cockrell, O.D., AOA Advocacy Group chair, recognized two AOA members as 2019 Advocates of the Year. Deanna Alexander, O.D., and Clarke Newman, O.D., were recognized for their exceptional and tireless advocates for the profession of optometry.

Additionally, third-year Southern College of Optometry (SCO) student Aaron Tollett was named recipient of the 2019 AOSA Student of the Year award. Tollett was recognized for being a devoted student leader at SCO and his ambition to increase student involvement in advocacy.

Crowning of a champion

Nora Kuby of Illinois College of Optometry lifted the coveted crystal trophy high above St. Louis' famed concert venue, The Pageant, on Thursday evening at the end of another hard-fought AOSA Optometry Student BowlTM XXVIII, powered by Essilor. The winner of a $1,000 award and lifetime bragging rights, Kuby won out over clinical wunderkinds and competitors from 25 rival schools and colleges of optometry in the high-speed, high-stakes test of optometric knowledge.

Always a highlight of Optometry's Meeting, hundreds of students and alumni alike donned their alma mater's colors and wore clearly enthusiasm on their sleeves. The equally celebrated "Spirit Award," honoring the school with the most energy, greatest costumes or flashiest entrance, was earned by Michigan College of Optometry.

Optometry's Meeting: News for you

Couldn't make it to St. Louis, but still want to stay in the know about the latest from your profession's premier meeting? The AOA has news for you: Visit AOA's meeting roundup at aoa.org/news.