July 7, 2021
ICYMI—Optometry’s Meeting® delivered exactly what the profession craved after a difficult 2020: collegiality. 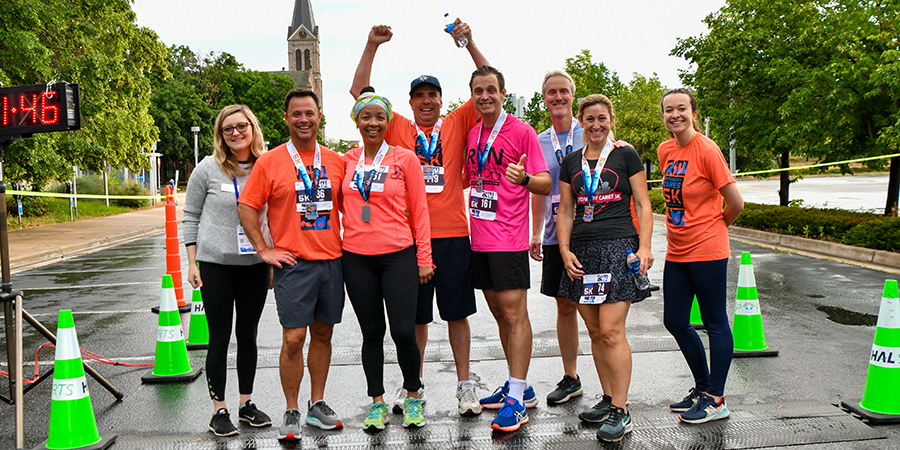 Two years apart is quite a long time for a profession that thrives on collegiality, but what Optometry’s Meeting® attendees lacked altogether in a pandemic-riddled 2020 they more than made up for in 2021.

Thousands of doctors of optometry, paraoptometric staff, optometry students and industry leaders delivered on the promise of Optometry’s Meeting 2021 in Denver, Colorado—[re]connecting with the leadership and networking opportunities, contemporary optometric education and collegial experience synonymous with the profession’s premier meeting.

“Isn’t it amazing to celebrate getting through this last year of virtual everything and all its uncertainty,” newly inaugurated AOA President Robert C. Layman, O.D., asked of House of Delegates attendees on Saturday. “Let’s recharge from the energy in this room and chart a course for the bold future of this profession.”

Just as the profession celebrated [re]connecting after so long apart, it also celebrated those within the profession who triumphed despite the trying times. Although Thursday’s opening event, supported by Johnson & Johnson Vision, recognized recipients of the AOA’s 2021 annual awards, a separate luminaries’ ceremony on Friday recognized the contributions of doctors of optometry to the profession.

Since 1998, the National Optometry Hall of Fame has recognized and honored doctors of optometry who are luminaries of the profession and imparted long-lasting contributions to optometry. Due to the cancellation of last year’s Optometry’s Meeting, Optometry Cares®—The AOA Foundation recognized hall of fame inductees not only from the Class of 2021 but also classes of 2020 and 2019.

Read more about the National Optometry Hall of Fame inductees.

Sarah Fratesi, O.D., of Mississippi, was awarded the W. David Sullins Jr. InfantSEE® Award. The honor recognizes an individual doctor of optometry who has made significant contributions to the profession or their community for outstanding public service involving the InfantSEE program. Honoring Dr. Sullins’ inspiring and passionate leadership as a driving force in optometry, the award started as a memorial fund established after his 2005 passing. View past Dr. W. David Sullins, Jr. InfantSEE® Award recipients.

Thomas Theune, O.D., of Colorado, received the Dr. Jerry P. Davidoff Vision Care Award. The honor recognizes an AOA doctor of optometry who is active in a clinical rehabilitation practice setting; has demonstrated a “giving back” spirit to optometry through the education of other practitioners; and has made a long-standing contribution and shared knowledge with fellow practitioners for the betterment of vision rehabilitation.

Optometry’s Meeting may be over, but it is never too early to start planning for next year. In 2022, Chicago, Illinois, will host the profession’s premier meeting, June 15-19, at the largest convention space in North America: McCormick Place.

Immediate Past President William T. Reynolds, O.D., cuts the ribbon to signify the opening of the Exhibit Hall at Optometry's Meeting® 2021 in Denver, Colorado.

AOA members reunite in the Exhibit Hall at the 2021 Optometry’s Meeting® in Denver.

AOA Past President David A. Cockrell, O.D., speaking in the House of Delegates.

Belinda Starkey, O.D., receives the 2021 Optometrist of the Year award.

George Ballato, CPOA, receives the 2021 Paraoptometric of the Year award.

AOA volunteer Johndra McNeely, O.D., celebrates AOA successes of the past year with colleagues at the 2021 Leaders Summit kickoff event. AOA's dedicated volunteers, who typically gather once a year to chart a course for the future, are meeting twice in 2021. Committees came together in person at Optometry's Meeting to continue the work they started earlier this year.

A panel of AOA volunteers discuss the challenges and successes of 2021 during the 2021 Leaders Summit kickoff event at Optometry’s Meeting® in Denver.

Diversity, Equity and Inclusion Task Force Chair Jacqueline M. Bowen, O.D., provides an update on actions to help the AOA and the profession become more welcoming and inclusive during the House of Delegates at the 2021 Optometry’s Meeting®.

The AOA Board of Trustees recite the Optometric Oath as the AOA House of Delegates opens during the 2021 Optometry’s Meeting®.

The AOA is leading a yearlong dialogue on how the COVID-19 crisis is impacting the eye health of children across the country, and Optometry’s Meeting® attendees are learning the guidelines for managing a young population with prolonged device use.