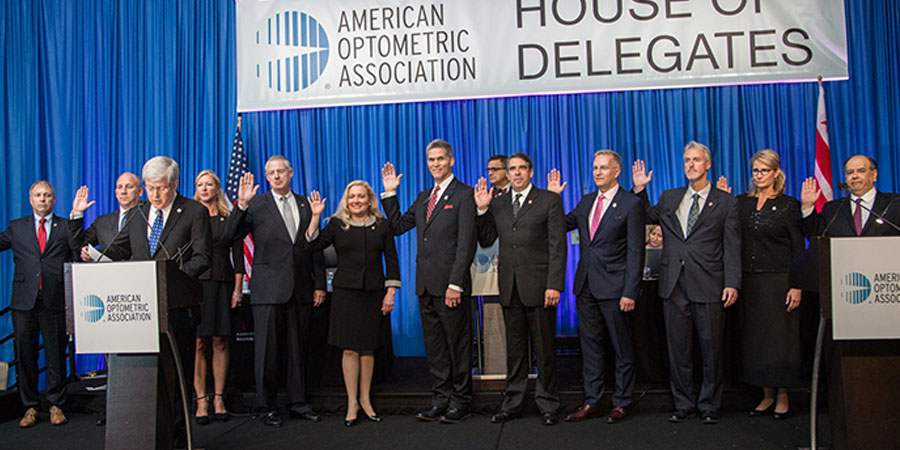 AOA President Christopher J. Quinn, O.D., of New Jersey, and other members of the AOA Board of Trustees were sworn into office as Optometry's Meeting® 2017 in Washington, D.C., drew to a close.

Elected Saturday by the House of Delegates to the Board of Trustees were:

Re-elected as trustees were Ronald L. Benner, O.D., of Montana, and Jacqueline M. Bowen, O.D., of Colorado. Newly elected to the board was Fred Farias III., O.D., of Texas.

In his inaugural address in the House of Delegates, while calling out and celebrating AOA's "amazing" successes, Dr. Quinn called for continuing the fight for expanded scope of practice for optometry, and also for doctors of optometry to fully embrace their expanding role in health care.

Due to the grassroots political engagement of the AOA and its state affiliates, optometry has transcended the old "detect and refer" philosophy of the past, he said.

"There has been an amazing transformation in our profession," Dr. Quinn said. "It was about 40 years ago when leaders of our profession had the foresight to recognize that the future success of our profession lies in making sure optometry is focused on professional patient care services. You have all heard about the famous 'LaGuardia meeting,' which set the profession on a path to where we are today. Our profession responded to the challenge, faced change, by working tirelessly to enhance our education and to expand our scope of practice to include the diagnosis, treatment and management of disease."

Yet, while taking pride in the profession's progress, there is more work to be done, he added.

"In order, to meet the needs of our society and health care system, we need to continue to expand our scope of practice both vertically, with advanced procedures and techniques, and horizontally, to address the primary health care needs of our society," Dr. Quinn said. "AOA and our affiliates need to continue to fight to expand. These coming battles, as with past battles, will be difficult. We all recognize the challenges of convincing those outside the profession, who cling to outdated notions, ignorance and economic self-interest, that we're deserving of this expanded capacity."

Doctors of optometry and the next generation of eye doctors must also challenge themselves, he added.

"We need to embrace the authority granted to us in legislatures around the country and have the courage to practice at the level that is consistent with our training and competency," Dr. Quinn said. "It is our duty to our profession to help meet the needs of society.

The AOA House of Delegates adopted several resolutions on Saturday. Delegates voted to:

"The House of Delegates, comprised of representatives of every state affiliate as well as our armed forces, federal service and student members, gave thoughtful consideration to opportunities and urgent challenges facing our profession. The House then acted decisively to establish clear priorities for the AOA, all aimed directly at safeguarding America's health and vision through continued expansion of optometry's essential physician role in the health care system," Dr. Quinn said

Optometry's Meeting ended Sunday with continuing education. But there were no shortage of events and news made.

Also during House of Delegates on Saturday, President Quinn announced formation of the AOA Health Policy Institute, a policy think tank that will develop evidence-based research, analysis and solutions on health care policy to support its advocacy on behalf of optometry and its patients' eye health and vision care.

Among the many presenters at Optometry's Meeting was Katherine E. McCarron, attorney in the Federal Trade Commission's (FTC) division of privacy and identity protection, who presented on FTC resources that can protect doctors from data breaches of business and personal data. "Identity theft is one of the No. 1 complaints we receive from consumers,' McCarron said. "It's a very, very widespread problem. The reason for that is because the data, in this economy, is the new oil, the new gold."