Owning Save Your Vision Month 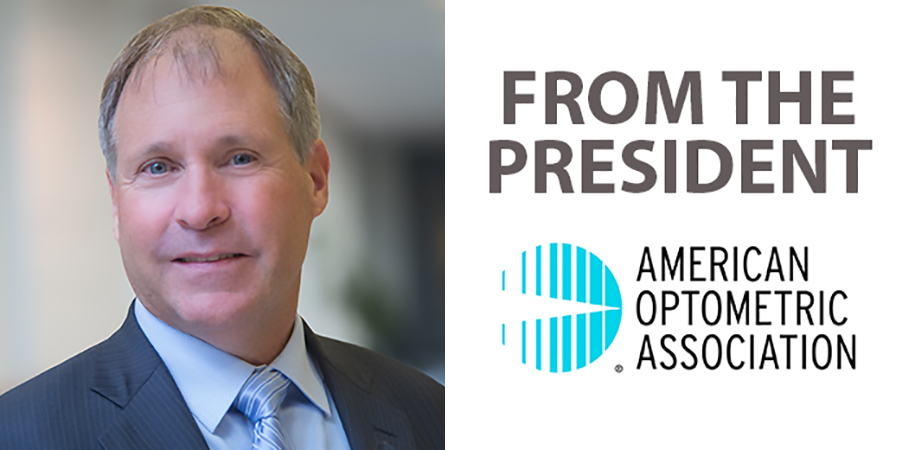 Throughout the calendar year, the AOA raises awareness around diabetes, contact lens safety and smoking and their impact on the public's eye health and safety. We are a profession that focuses on the functioning of the eye, but our vision is caring for the whole person.

March, though, is optometry's time. That's when doctors of optometry celebrate Save Your Vision Month, which traces its founding to 1927 by members of the AOA.

In the beginning, the celebration was reserved for only a week. President Lyndon B. Johnson raised its profile in 1963 by making it a national observance. Then, in 2005, the AOA House of Delegates voted to extend the campaign to a month. Today, the AOA is a sponsor of Save Your Vision Month.

With all due respect to the other laudable health holidays, no other national observance means quite as much to optometry. It is our observance.

During March, we take time to remind Americans of the importance of eye health and comprehensive eye examinations, performed by doctors of optometry.

Never has the opportunity been greater for AOA members to educate the public. Eye health and vision care must be viewed as a national priority—as was expressed in the 2016 National Academies of Sciences, Engineering and Medicine (NASEM) report, "Making Eye Health a Population Health Imperative: Vision for Tomorrow."

In the report, NASEM underscored what our profession has long understood: Vision is tied to the health of this nation. The report estimated 142 million Americans over age 40 experience vision problems. What's scarier is that those problems can be addressed. Between 8.2 and 15.9 million people have a correctable visual disability attributable to uncorrected refractive error. Research bears out the importance of healthy vision to children, so they can learn and develop to their full potential in life, and to adults, who are more productive at work and more socially engaged with the world around them.

Again, the AOA is doing its part. We have partnered with industry on the Think About Your Eyes (TAYE) campaign to raise awareness around the essentialness of comprehensive eye examinations. TAYE is coming off a banner year in 2017 with more than 1.18 million eye exams that resulted from the campaign.

As successful as TAYE is, advertising can be expensive and doesn't reach everyone. There's much more each of us can do. Start with Save Your Vision Month. Every doctor of optometry can deputize his or her own patients and ask them to amplify the message about the importance of regular eye care to their family, friends, colleagues and neighbors. Make them ambassadors for eye care. Now that's powerful!

The AOA has produced resources for doctors of optometry to publicize our observance in their local communities. Use these to share with patients how important eye health and vision care are to the vitality of their cities, towns and suburbs. Use the power of your own patients to build your practice and help solve a great American public health need.

Tareq Nabhan, O.D., and Sherrol Reynolds, O.D., were nominated by the AOA and selected to serve on the Medicare Evidence Development & Coverage Advisory Committee (MEDCAC). Their appointments to the influential committee, under the Centers for Medicare & Medicaid Services, reflects the AOA working hard to raise the profile and influence of the profession in policy-making circles.