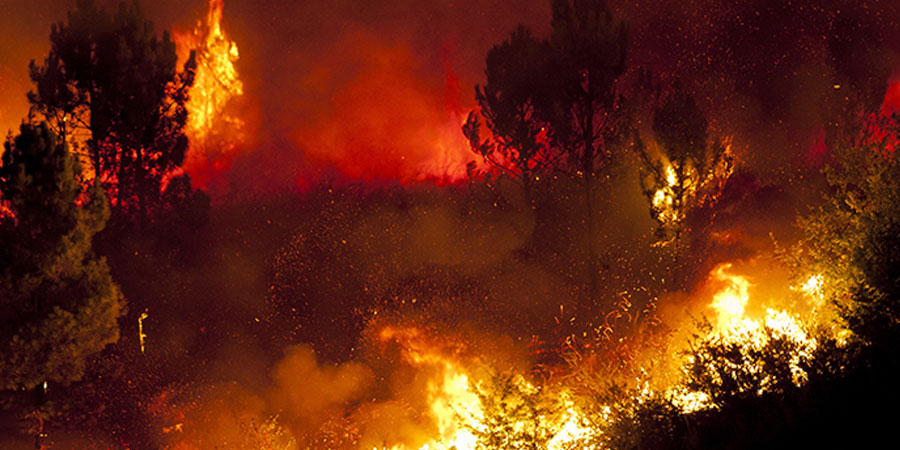 Wildfires are a fact of life in arid California. Prescribed burns and lightning strikes commonly spark blazes that billow smoke for days on end. So, when a smoke cloud drifted over Whiskeytown Lake, it wasn't necessarily cause for concern for Curtis Newcomb, O.D.—or anyone, really—some 18 miles away in Redding.

"No one, and I mean no one, ever thought Redding would be threatened," Dr. Newcomb recalls. But that was on a Monday. That Thursday, the Carr Fire had jumped into the gold-rush town of Shasta only eight miles away. It would leave a swath of destruction, including a close friend's home, before jumping the Sacramento River to threaten communities on the east bank.

"But Thursday evening was when things went sideways big time."

Living on Redding's city limit nearest the fire, Dr. Newcomb and his wife, Janet Newcomb, O.D., found their home lost power around 4 p.m. By the 6 p.m. commute, he could see three conflagrations in the foothills fanned by extraordinary 'firenadoes' (fire tornadoes). By 7 p.m. a "300-foot wall of flame" threatened their home, and the Newcombs evacuated into town with a carload of clothes, overnight bags and photo albums. Roughly half of Redding, 40,000 people, were doing the same.

The Newcombs retreated downtown to a friend's home where, only four miles away from the nearest blaze on the city's outskirts, Dr. Newcomb recalls a haunting image.

"It looked like Armageddon," he says. "This was an angry wall of flames. The entire sky was red, and the flames were so close; you could hear pine trees exploding and propane tanks blowing up. It sounded like a train coming through the middle of a shotgun showdown."

But the Newcombs had hardly any rest. By 10 p.m., they evacuated yet again 15 miles south toward Anderson, dodging the parade of fire trucks and equipment flying through the city.

It was a shared experience that half of his staff, and many patients, would recount the next morning when Dr. Newcomb opened the practice. Over the course of the day, he'd learn at least 20 friends and patients lost their homes by that evening. However, the wildfire was still far from under control.

Flames would threaten the Newcombs' home into the weekend, coming as close as their driveway, but never further. Firefighters stanched the conflagration at Redding, although on Monday, Aug. 7 the fire was only 45% contained. Torching roughly the size of Denver, the Carr Fire has killed eight people and destroyed more than 1,000 structures. It's now the seventh most destructive fire in state history and still smolders.

"It is still really smoky," Dr. Newcomb wrote on July 31. "The amount of ash falling is much better, but all of the town looks like an ashtray. Folks are using blowers to try and clean off the sidewalks in front of their businesses. If you don't wear a mask, you can taste it. There is so much ash that at times your tongue can actually appreciate a grit of sorts."

That ashfall and smoke is a deleterious concoction of carbon, dust and pollutants only microns in diameter. This fine particulate matter (PM) is not only harmful to the respiratory system but also the ocular surface. In some cases, chronic smoke irritation may exacerbate the inflammatory response on the conjunctival surface and promote conjunctival scarring; most commonly, wildfire smoke aggravates dry eye symptoms, ocular allergies and contact lens discomfort.

Tad Buckingham, O.D., assistant professor and attending physician at Pacific University College of Optometry and division chief with Forest Grove Fire & Rescue in Oregon, speaks from firsthand experience when it comes to wildfires. It's not uncommon for smoke to have a 'whirlpool effect,' swirling through communities for prolonged periods of time. This exacerbates discomfort and hits those with borderline ocular disease problems hardest.

"These fires are having a large impact on community infrastructures affecting the people who live and work in them," Dr. Buckingham says. "As optometric physicians, we need to be ready and willing to open our practices to the patients of our colleagues who have been impacted by these fires. This support ensures that those affected by these fires are getting the best care and support available for the conditions."

Special consideration also should be given to firefighters, Dr. Buckingham says. Those crews could experience severe ocular side effects from smoke, ash and heat. First, he recommends firefighters wear glasses or daily disposable contact lenses. Secondly, to control inflammation, he recommends loteprednol ophthalmic administered before bed.

"It works to calm ocular surface irritation and acts as a time release, so firefighters do not have to remember to try and add drops during the day while actively fighting fires," he explains. "This will be used during the firefighter's deployment but can be stopped, without tapering, once the firefighter stops being exposed to the acute wildfire environment."

Despite the calamity, the Newcombs keep their practice doors open and do what they can to keep regularity in the office. In fact, Dr. Newcomb says many patients they've seen in recent days are simply glad to leave their hotel rooms or evacuation centers for something to do. It's anything but business as usual, however. Sharing stories, hugs and prayers with their patients gave the Newcombs the idea that they could do more for their community.

Practice vendors were attuned to the Newcombs situation, sending in extra cases of wetting drops that were given to fire fighters and patients with ocular irritation, while their lab agreed to send free lenses for those who lost glasses in the fire. So, too, insurers have stepped up to replace lost glasses, and the practice offers anyone without insurance at least half-off eye wear for disaster relief.

"The folks we do business with have been exceptional," he adds. "We feel fortunate to be able to practice and be of service."

Meredith Turner, O.D., echoed those sentiments from her practice further west along Redding's Eureka Way, a main thoroughfare for fire fighters trekking toward the blaze. Evacuations forced her to close office Friday, and she hadn't been to her home in over five days. Many of her patients in west Redding lost everything, their eyewear among the smallest of concerns. But, Dr. Turner and the community at large is helping any way they can.

"I have patients who either lost their eyewear in house fires or during the evacuation process itself, and I've daily treated patients with eye irritation and allergies from the smoke, even removing a piece of soot embedded in one patient's cornea," Dr. Turner said on Sunday.

"I've been very impressed with my community despite this tragedy. Every patient who lost their home had someone to stay with, someone to help them during this difficult time. From what I've seen, people banding together and helping each other, I am proud to be serving this community."

Optometry's Fund for Disaster Relief helps change the lives of those doctors affected by natural disasters, providing immediate financial relief for critical and urgent needs, such as food, clothing and shelter. A program of Optometry Cares ®—The AOA Foundation, Optometry's Fund for Disaster Relief has granted nearly a million dollars in grants since its inception in 2005.

Anyone can make donations to the disaster fund at any time. Likewise, any doctors and optometry students affected by recent natural disasters can apply for assistance.

Tareq Nabhan, O.D., and Sherrol Reynolds, O.D., were nominated by the AOA and selected to serve on the Medicare Evidence Development & Coverage Advisory Committee (MEDCAC). Their appointments to the influential committee, under the Centers for Medicare & Medicaid Services, reflects the AOA working hard to raise the profile and influence of the profession in policy-making circles.