November 24, 2020
Integral to making the AOA the force for optometry it is today, Brauns is praised by volunteers and staff for her leadership, professionalism and dedication. The AOA remains positioned to continue powerful advocacy for optometry. 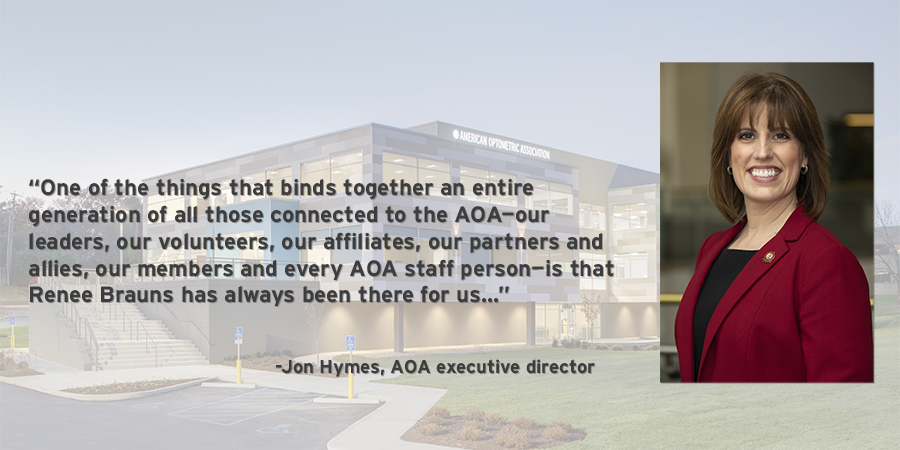 Renee Brauns, associate executive director of the AOA, has bid goodbye to the organization she has helped lead in various capacities for the past 22 years. Brauns leaves behind an AOA stronger for her leadership.

Brauns is celebrated by AOA staff and volunteers for being a dedicated and effective executive, and as a friend. Among many projects, Brauns was cited for the leadership she and AOA Chief Financial Officer Ryan Hayes showed as they oversaw the yearlong, major renovation of the AOA national headquarters in St. Louis, which was completed in November 2016—below budget and on time—without interruption of service to members.

Her leadership also was significant as the AOA and affiliates have navigated the COVID-19 crisis for the past 10 months and all its serious challenges and consequences, while maintaining the AOA’s overall strength and mission.

“The entire AOA Board of Trustees is saddened by the departure of our Associate Executive Director Renee Brauns,” says AOA President William T. Reynolds, O.D. “Renee has been the heart and soul of AOA for the past 22 years and has been not only a trusted colleague but also a friend to all of us. We are grateful for everything Renee has done and the strong organization she is leaving.

“Our AOA and affiliate staff will continue in their peerless work for our profession–delivering results that are difference-making for optometry practices,” Dr. Reynolds says. “The 24/7 dedication to our mission has never been more important than during the pandemic, something that every AOA doctor of optometry and optometric student can be proud of.”

“For 22 years, Renee has dedicated herself completely to the AOA and our mission of serving optometry,” Hymes says. “She has worked tirelessly in building, shaping, growing, strengthening and leading this organization toward what it has become today—a creative, caring, relentless and highly effective nationwide force for America’s health and vision. In this moment of historic crisis and disruption, the AOA holds a more special place in the hearts of our members and is more directly relevant to their practices than at any time in its long and storied history—and that is the truest reflection of the difference that Renee has made.

“One of the things that binds together an entire generation of all those connected to the AOA—our leaders, our volunteers, our affiliates, our partners and allies, our members and every AOA staff person—is that Renee Brauns has always been there for us,” he says. “As a uniquely inspiring executive leader, wonderful mentor, wise counselor, informed pathfinder, trusted partner, always available, reality checker, energetic motivator and caring friend, her impact has been extraordinary and will serve as a lasting guide for what’s possible as we move forward together.”

Behind the scenes, she encouraged everyone to be their best

Past AOA President Andrea P. Thau, O.D., says Brauns may not realize how deeply respected she is.

“In 22 years, she worked tirelessly on behalf of AOA and optometry,” Dr. Thau says. “She did it with a full heart. She always did it with grace and dignity. She never lost her cool. She always carried herself professionally and was behind the scenes, encouraging everyone to do the best they could and be the best they could be. That was true for staff and volunteers, including the board. She was very inspiring to people.

“She made so many changes through the years,” Dr. Thau adds. “She helped to build up Optometry’s Meeting® and made it so much more successful. She helped change how we interact with industry sponsors and transformed Optometry Cares®—The AOA Foundation and the archives. Incredibly, she managed to build and renovate our entire building, in conjunction with Ryan Hayes, by stripping it down to the girders and building it back up a half at a time—on time and under budget, which is unheard of, as the organization continued to operate at full throttle. She always had a sunny demeanor no matter what. We’re going to really miss her.”

An Illinois native, Brauns’ career with the AOA started in 1999 when she took on a dual role, managing relationships for the association's Industry Relations Center, leading a period of steady growth, and in the formation of what is now Optometry Cares. She advanced in leadership roles and was promoted to the newly created executive position of chief operating officer in 2010, leading over seven groups and centers. In this role she successfully led organization-wide initiatives to expand membership, transform strategic communications and improve support services for state associations. In 2013, she was honored as one of Vision Monday's Most Influential Women in the Executive Suite for guiding the AOA forward, offering inspired leadership and achieving the highest levels of performance.

Dr. Reynolds announced this week that a plaque will be placed in the former atrium in AOA headquarters in St. Louis in honor of her dedicated service.

“I have been truly blessed to have had the honor and privilege to be a part of such an influential and critically important organization for the profession of optometry and part of this optometric family,” Brauns says. “I don’t know where the profession would be without the AOA. Professionally and personally, I have thoroughly enjoyed my time with the AOA. It has provided me with so many opportunities, experiences and connections with extremely dedicated individuals.

“It has been rewarding working with such passionate individuals,” she says. “It is their passion that drove me to want AOA to succeed and give back even more to the profession. I am leaving on the best of terms and with the utmost respect and admiration for our dedicated volunteers, board and staff led by Jon. The AOA is a wonderful organization and is well positioned for the future.”