October 22, 2015
Renovation will significantly reduce annual maintenance costs and improve the facility’s infrastructure, which will allow AOA to better serve its members. 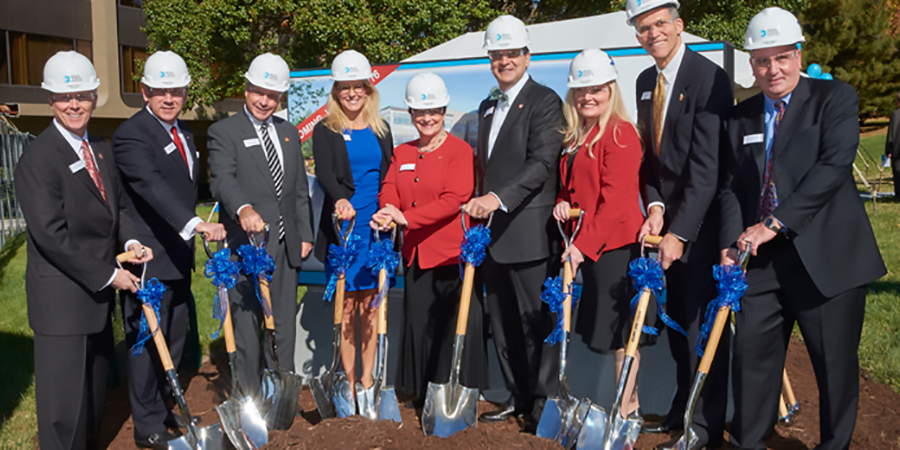 The AOA hosted a ceremony on Oct. 16 to mark the beginning of a major renovation to the national headquarters facility.

Steven A. Loomis, O.D., AOA president, and other Board of Trustees members including AOA president-elect Andrea P. Thau, O.D., and Samuel J. Pierce, O.D., secretary-treasurer, were joined by federal, state and local government officials to officially launch the next stage of the advancement of optometry and honor the profession's historic ties to St. Louis and Missouri.

AOA has occupied the building, which was constructed in 1968, since 1978. The facility has had no major work performed. A renovated AOA headquarters will significantly reduce annual maintenance costs and improve the facility's infrastructure, which will allow AOA to better serve its members.

The AOA's building committee, also present at the ceremony, and comprised of Board members David A. Cockrell, O.D., immediate past president, Christopher J. Quinn, O.D., vice president, Robert C. Layman, O.D., trustee, and Dr. Loomis, led a thorough investigation of options and concluded that a renovation was the most cost-effective long-term solution for the AOA, which owns the land and the building.

"By investing even more in our members and our mission of advocating for patient access to essential care, the AOA is ensuring that we will continue to advance quality, accessible eye care for America from this city and state for decades to come," said Dr. Loomis. "Our groundbreaking ceremony represents a renewal of the AOA's more than 100-year-old founding commitment to our member doctors and a way for us to say thanks to our outstanding neighbors and government officials who have helped make optometry feel at home here."

In 2015, the World Council of Optometry officially relocated to the AOA headquarters from its previous offices in London.

The AOA will continue to conduct business as usual from the site throughout the renovation process, which is being done in phases. It is scheduled for completion by the end of 2016.

In 2019, the AOA will celebrate Optometry's Meeting®, the profession's largest and most important annual gathering, in St. Louis.