June 17, 2019
AOA aggressively goes with future’s flow because the success of the profession of optometry in the future will be anchored by our actions today 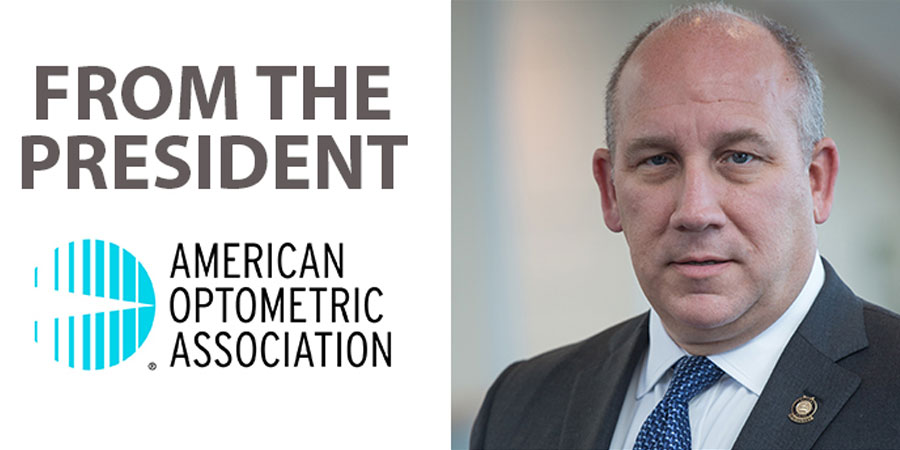 Excerpted from page 5 of the June 2019 edition of AOA Focus.

Growing up, I was a big fan of the "Star Trek" TV show and movies, and even now I can recall the crew's mission uttered by Capt. James T. Kirk.

"Space: the final frontier. These are the voyages of the starship Enterprise. Its five-year mission: to explore strange new worlds. To seek out new life and new civilizations. To boldly go where no man has gone before!"

That's us. The AOA is seeking to go boldly where few doctors of optometry have gone before.

A decade ago when I was first elected to the AOA Board of Trustees, the real estate and stock markets were crashing. Like others in these markets, the AOA took a hit, with its reserves hitting historic lows. The debate over the Affordable Care Act (ACA) was heating up, and the AOA was working hard to make sure the profession was in the thick of the debate over the delivery of the nation's health care.

Tides change, though. The ACA, which made children's vision an essential benefit, was signed the next year. The Harkin Amendment would bar discrimination by insurers against licensed health care providers. Also, I am pleased to report that our reserves are quite healthy today.

And yet, a decade later, we're still making maneuvers to ensure the future health of our profession. We're cutting through the headwinds from an evolving health care landscape and outside forces seeking to chip away at the essentialness of the comprehensive eye examination and the sacredness of the doctor-patient relationship.

Last June, I announced the Future Practice Initiative in the House of Delegates during Optometry's Meeting®. Well underway in several states, the initiative is a collaboration between the AOA and our state affiliates to aggressively pursue major scope enhancement legislation around the country. We also launched a task force that will provide the educational resources to prepare doctors of optometry to practice at their fullest, advanced scope. Ophthalmology has taken notice; we've seen their counter-initiative ads and efforts to raise money to fight optometry's advancement.

The AOA will be relentless in its support of these state battles. We will continue to help strategize, assist with grassroots and amp up lobbying efforts because we are aware of how important this is to the future of the profession and patient care. We will provide the resources to doctors of optometry to meet the demands ahead of us.

The success of the profession of optometry in the future will be anchored by our actions today. What can each of us do in this brave new world? Encourage nonmembers to join. Contribute to AOA-PAC and your state political action committees. Embrace change by signing up for continuing education. There has never been a greater time to be a doctor of optometry!

I'd like to thank the previous presidents who steered a steady course for the AOA in recent years. Each inspired me in different ways, and for that I'm grateful. I also wish well to our incoming president, Barbara L. Horn, O.D.

The AOA, which has lived long, will prosper.