‘Unprecedented’ human impact of western wildfires: How optometry is affected

September 23, 2020
Optometry’s Fund for Disaster Relief stands ready to assist doctors on their path to recovery following an historic 2020 wildfire season in the western U.S. 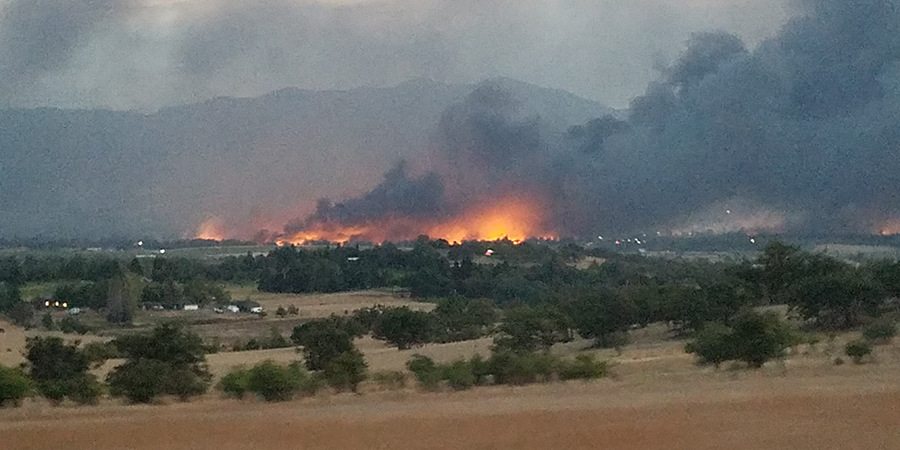 Joanna Carter, O.D., and her family took this photo of wildfires outside Medford, Oregon, as they evacuated their home on Sept. 8. The Almeda Drive Fire claimed four lives and over 2,000 structures.

Out of the dusky, yellow sky, a twin-engine roar reaches Tad Buckingham, O.D., moments before a massive, water-scooping air tanker emerges to take up hundreds of gallons of Henry Hagg Lake. Notwithstanding the boding, smoky landscape in that corner of northwest Oregon or the hive of wildfire-fighting activity, it’s been a good couple of days at the 200-acre Powerline Road fire nearby historic Tillamook State Forest.

“We are just finishing mopping up hot spots—the fire weather has reduced the fire behaviors, allowing us to get it under control,” says Dr. Buckingham, assistant professor and attending physician at Pacific University College of Optometry and division chief with Forest Grove Fire & Rescue. But turn back the calendar to Labor Day and it was a much different story.

“We lost half of our crews, before we got our fire under control, to fight much larger and threatening fires—the Riverside, Beachie Creek and Holiday Farm locations,” Dr. Buckingham says, noting three major fires east of the I-5 corridor between Portland and Eugene.

To date, 17 major wildfires have turned nearly a million acres of the Beaver State into a veritable furnace with those three blazes responsible for over half of the total burning acreage. What’s more, not one of those three fires are more than 38% contained currently, having burned for weeks already.

Wildfires are a fact of life this time of year, but the sheer human toll from this season is downright unprecedented with several Oregonian communities entirely razed, Dr. Buckingham says. Tragically, this record fire season has claimed nine lives with 4,800 structures destroyed and tens of thousands under evacuation orders. And that’s just Oregon.

Throughout western states—from California to Washington, and Colorado to Idaho—communities are enduring the fallout of an historic wildfire season. Currently, 78 large fires are burning 3.9 million acres of land, nationally, and 6.9 million acres have burned to date. California, alone, has 27 major wildfires—many outside major metropolitan areas in Los Angeles and the San Francisco Bay Area—that have caused 26 fatalities and destroyed 6,400 structures. These fires have blanketed millions of residents in smoky conditions and hazardous air quality for days and weeks on end, even billowing milky-yellow skies toward the eastern U.S. and as far away as Europe.

“The amount of human impact is unprecedented,” Dr. Buckingham says.

Unprecedented is right, especially when considering that even communities not directly affected by wildfires and evacuations still must cope with some of the worst air quality in the world. In fact, the smoky fallout in four western U.S. cities unseated every city in China for the distinction of having the worst air quality in the world, last week—Portland, Oregon, and Seattle held the Nos. 1 and 2 spots while San Francisco and Los Angeles rounded out the 4 and 6 positions. Some communities in Oregon have even registered record air quality index (AQI) readings at or above 500 (hazardous level) on a chart that generally only goes to 500, while local workplaces have closed and some areas evacuated altogether due to the hazardous air.

“Smoke from natural or organic sources is composed of a mixture of microscopic/macroscopic particles and chemicals produced by the incomplete combustion,” Dr. Buckingham explains. “The most common contents include carbon dioxide, water vapor, carbon monoxide and particles.

“Many other chemicals are found in smoke in less concentrations depending on what is burning, including benzene, aldehydes, acid gases, sulfur dioxide, nitrogen oxides, toluene, styrene, Asbestos, arsenic, cyanide, and metals and dioxins. The smoke is both an ocular and respiratory irritant, in the short-term, that can inflame many other health issues either directly or indirectly.”

These various noxious chemicals and particles found in smoke act as pro-inflammatory mediators that will cause disruption of the tear film, resulting in desiccation and corneal epithelial death, Dr. Buckingham notes. This perpetuates ocular surface stress that starts from pro-inflammatory cytokine production and loss of goblet cells, promoting ocular surface inflammation. In the long-term, the smoke also will increase the risks of psychological and carcinogenetic results.

Therefore, Dr. Buckingham offers four suggestions that doctors of optometry can recommend to help patients cope with the conditions:

“Many health care agencies, including teaching institutions and primary care practices, had to shut down temporarily or limit practice hours due to the terrible air quality,” Dr. Buckingham says, not counting those doctors who had to evacuate due to fires. “These factors have limited opportunities to help during the peak of these threats. [But] as the threat levels start to decrease, it has allowed many colleagues to help to the best of their abilities.”

That help comes in many forms and aside from providing for the primary eye health care needs of their patients, doctors of optometry throughout the west are banding together to help the immediate, tangible needs of devastated communities, too.

In southern Oregon, the Almeda Drive fire leveled the towns of Phoenix and Talent. Although relatively small compared to the major wildfires up north, the Almeda fire was no less destructive in claiming four lives and at least 2,357 structures.

“That’s thousands of people and families who lost their living space and many more who still don’t have access to their homes because of evacuations,” says Joanna Carter, O.D. Her Medford, Oregon, vision therapy practice is just a 15-minute drive down the Rogue Valley from the communities of Phoenix and Talent. So close that a call from a friend asking about setting up a donation center—especially for eye care supplies—for these families was an easy decision for Dr. Carter.

“I wrote, personally, to a bunch of doctors here in southern Oregon asking for supplies like lubricating drops and contact lens solution samples,” Dr. Carter says. “A dozen doctors got back with me right away and now we’re doing a collection again. A doctor up near Portland sent two boxes in the mail and wrote that she’d send more, then a friend in San Diego sent supplies, too. It’s emotional to see people from even beyond our area helping out.”

It’s been an emotional week and a half—another fire only a dozen or so miles east still inundates Medford in smoke, while Dr. Carter and two of her staff have had to evacuate multiple times. It seems everyone has a devastating story to share. But likewise, the situation has prompted many to come together in support of affected residents and embattled firefighters. The Oregon Optometric Physicians Association shares story after story of doctors of optometry donating or assisting their communities, and the same is true of doctors throughout the western U.S. coping with a terrible wildfire season.

“It’s really real down here,” Dr. Carter says. “I’ve lived in southern Oregon for 15 years and wildfires weren’t the norm when I first move here—they weren’t such a big deal. Then, a few years ago it came to a point where we thought, ‘Is this just what every summer is going to be? Just smoke-filled ick?’ Now, we expect these fires but not this devastation.”

When disasters strike, Optometry’s Fund for Disaster Relief stands ready to help support doctors and optometry practices as they begin the difficult path toward recovery.

A program of Optometry Cares ®—The AOA Foundation , Optometry’s Fund for Disaster Relief is optometry’s exclusive financial support program in the wake of disasters and is entirely sustained by donations from colleagues and industry partners. Since 2005, Optometry’s Fund for Disaster Relief has distributed $1 million in financial assistance to over 500 doctors and students in at least 32 states immediately following disasters and civil unrest.

Optometry’s Fund for Disaster Relief is available to aid doctors who have experienced property damage to their home or business as a result of a disaster, including the current wildfire season.

Optometry Cares is committed to seeing its vision come to fruition, raising awareness about the importance of eye health, increasing access to vision care, and providing support to doctors of optometry and students in need. Learn more about Optometry Cares’ programs and how you can support this mission.