All in the family: Three generations of eye care

October 16, 2015
The Mayes family has optometry in their blood. 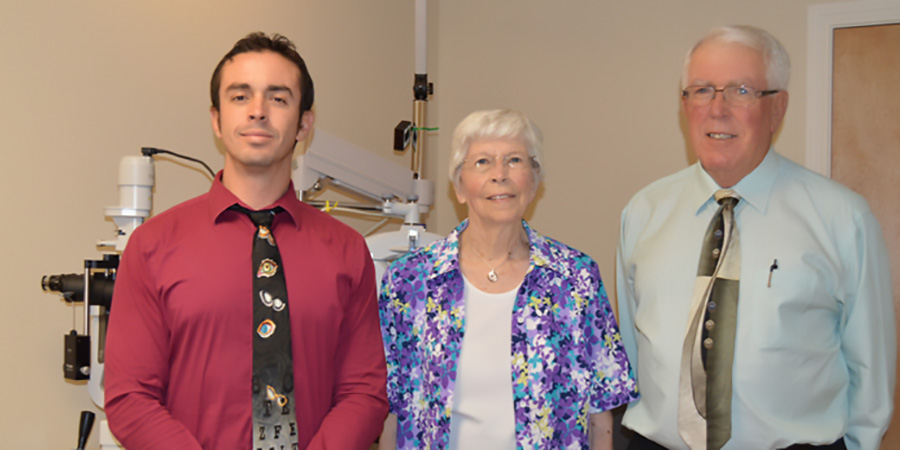 If optometry is indeed in the Mayes family's blood, as three generations claim, the bloodline began with the father of Dixie Mayes, O.D.—Dr. James Ellis Hewett—who was a doctor of optometry nearly a century ago in Amarillo, Texas.

Dr. Dixie Mayes and her husband [the late Dr. Doyle Mayes] followed in his footsteps, and then her son, James Mayes, O.D., and grandson, Daniel Mayes, O.D., did the same.

The family practice, Mayes & Mayes, has served the small town of Hobbs, New Mexico, for 67 years. Dr. Dixie Mayes, among the first women licensed in the state, retired five years ago but continues to pop into the office several times a week. Dr. James Mayes and Dr. Daniel Mayes now run the practice, and Dr. James Mayes' brother, Steve Mayes, is the office optician.

Who inspired you to work in optometry?

Dr. Dixie Mayes: My father. I'd see him work and go to local meetings, and he became my mentor. My husband served in World War II, and he became an optometrist too.

Dr. James Mayes: Both my mom and dad were inspirations. Growing up, I'd go to the office after school—that was pretty much the babysitter.

Did you feel you were expected to join the family business?

Dr. Daniel Mayes: I watched my father and grandparents have a successful career but still have time to raise a family, and I knew that's what I wanted for myself. I wasn't pressured by anyone. My family challenges me to be the best I can be, and they show me how to be successful and humble. The business foundation they had already set for me was priceless.

What's most challenging about working with your family?

Dr. Dixie Mayes: I remember being tired at the end of the day, working full time and raising children. But it's been nothing but rewarding working with my son and grandson.

Dr. Daniel Mayes: My dad and I don't see each other much during the day. He has his own patients, and I have mine. The hardest part is incorporating new technology into the practice—specifically my father transitioning from paper charts to electronic health records, which I was trained on.

Do you have rules about keeping business talk out of family gatherings?

Dr. Daniel Mayes: There's always going to be some kind of problems, but you don't take it home.

Can you offer any tips for having a successful family practice?

Dr. Daniel Mayes: Be willing to stay after hours and work weekends, because the name on the building not only represents you and your hard work but those family members before you.

Dr. James Mayes: Make sure you never contradict each other in front of a patient or other staff. I think because we're family, we communicate better. We know each others' moods and how to approach each other, and we all have common goals.

My mom says, "If you love what you do, you never have to go to work." Daniel and I feel the same way. We just enjoy what we do.