December 27, 2017
Longtime doctors of optometry share the secret of their longevity. 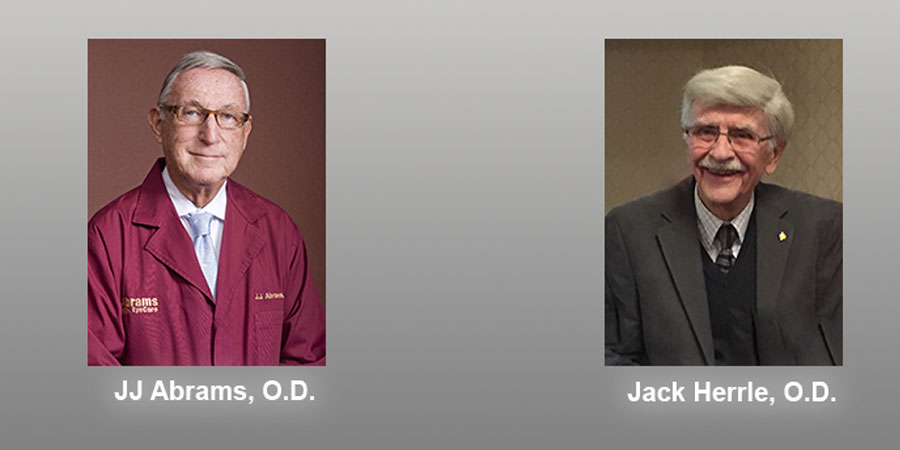 When JJ Abrams and Jack Herrle, O.D., started their optometric careers, they didn't put a lot of thought into how long they might be practicing. They were just eager to help patients in their respective communities see better.

Now both doctors of optometry are staring down 2018.

"When I started in 1950, I didn't think about my longevity," says Dr. Abrams, who practices in the Indianapolis area with his son and granddaughter, both ophthalmologists.

"I didn't think I'd be seeing patients for this many years," he adds. "January 19 starts my 68th year in optometry."

Dr. Herrle opened his practice in Connecticut in the mid-1950s. He called his first practice "a little place on the corner."

"I never thought about it-never anticipated it," he says.

Yet here they are, after practicing in excess of six decades each.

Drs. Abrams and Herrle still practice a few days a week. Besides their passion for optometry, they have other things in common.

Both doctors of optometry say they were the beneficiaries of the GI Bill. During World War II, Dr. Abrams enlisted in the U.S. Navy at the age of 17. Dr. Herrle served in World War II and the Korean War. They graduated, respectively, from Northern Illinois College of Optometry and Columbia University in New York. At the time, Columbia had the first university-based school of optometry in the country.

Neither appears to be hurrying into retirement. Retirement will be some time in the future, Dr. Abrams says. "I'm beginning to realize that I am in my 90s and still working," he says. "I'm enjoying what I do."

So, what's the secret to their longevity? Patients and their passion for optometry, they say.

"I am blessed with good health that keeps me going," Dr. Abrams says. "Driving to work, I look forward to seeing new patients and old ones."

Dr. Herrle says he, too, still relishes his relationships with patients. He has always pursued continuing education opportunities beyond the requirements set by state licensing boards to stay current and provide them the best care he can. He has called optometry his vocation and avocation.

Says Dr. Herrle: "Practicing is my life. It's what I enjoy doing."