June 23, 2019
The 122nd AOA Congress at Optometry’s Meeting® adopted a range of resolutions and bylaw amendments to advance the practice of optometry and public access. 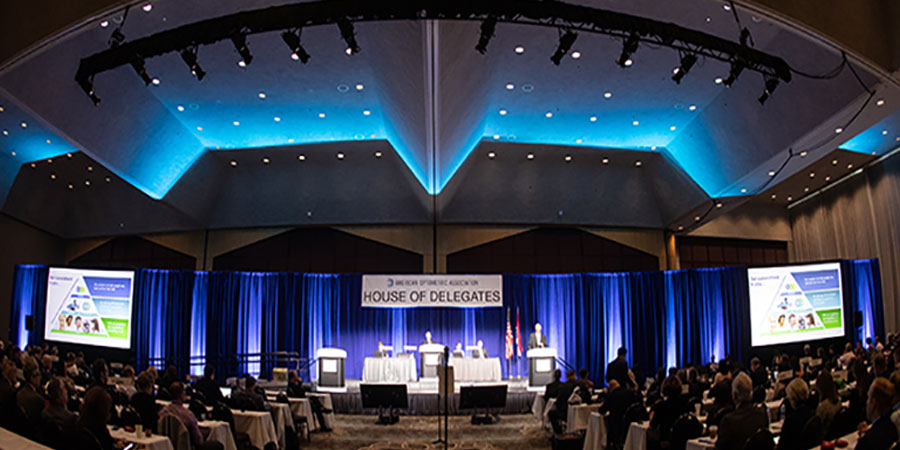 Before adjourning, the 122nd AOA Congress at Optometry's Meeting® adopted a range of resolutions and bylaw amendments to advance the practice of optometry and public access.

The resolutions, passed June 22 by the House of Delegates, include:

Resolves that the AOA supports the use of AOA MORE (Measures and Outcomes Registry for Eyecare) to collect data from doctors of optometry to the Centers for Medicare and Medicaid Services (CMS). The resolution also encourages (1) voluntary participation in the MIPS program by doctors who are not required to participate and (2) that current program participants report their MIPS data to AOA MORE rather than directly through the CMS site.

Resolves that AOA member doctors of optometry engage with non-optometric physicians in their community to educate them on the need and value of comprehensive eye care, and the MIPS activity credit available to them.

Think About Your Eyes (TAYE) campaign

Resolves that AOA members use TAYE's resources to encourage patients to seek comprehensive eye examinations. The AOA is partnering with TAYE on the national public awareness campaign.

Recognizes a renewed dedication and commitment by the AOSA to the success of its membership, the AOA and the profession of optometry, and calls upon all AOA-affiliated associations to recognize the AOSA's extraordinary achievements and reward its efforts by strengthening outreach to optometry students and recent graduates. Among a number of AOSA projects in 2018-19, it adopted four pillars (education, advocacy, student experience and tools for success); embarked on a rebranding campaign; and developed an interactive map resource connecting student members with AOA-affiliated associations.

Support for the United in Possibilities Campaign

Resolves that AOA-affiliated associations be called upon to adopt and actively support the research-driven, award-winning United in Possibilities campaign to better inform potential members of the benefits of AOA membership, and to attract new members.

To amend resolution No. 1918, AOA Support of State Scope of Practice Issues (adopted 1996)

Safeguarding the highest standard of care for our nation's veterans, and saluting those doctors of optometry who provide that care

Resolves that (1) the AOA salute doctors of optometry on the front lines providing outstanding eye health and vision care to America's veterans, (2) that the AOA recognize the extraordinary efforts of its members and all AOA-affiliated associations to safeguard the standard of care provided to our nation's veterans and (3) that the AOA and the affiliated associations continue to cooperate on and prioritize efforts to safeguard the standard of care received by veterans and support doctors of optometry who provide the care.

Resolutions adopted by the House of Delegates are studied and reviewed by the Judicial Council prior to going into effect.

In other news, the House of Delegates approved a pair of bylaws amendments concerning a new associate membership classification as well as establishing a new course of action for removing an individual from the AOA Board of Trustees.

Regarding the former, a new AOA associate membership classification and qualifications for such were established for "research scientist members." This new classification is available for individuals without a doctorate of optometry but who hold a Ph.D. (or are a Ph.D. student) and are employed by an Accreditation Council on Optometric Education accredited or pre-accredited school or college of optometry. The AOA Council on Research first posed the amendment, noting that these non-O.D. individuals were not eligible for the AOA's optometric educator membership despite their vital contributions to optometric research. The new classification is expected to go into effect Jan. 1.

Additionally, delegates revised and adopted a new procedure for removing an officer or trustee from the AOA Board of Trustees. The process calls for the removal of an officer or trustee by a three-quarters vote of the Board of Trustees (excluding the individual under consideration) for serious or repeat violations of the AOA's policies or procedures, or other serious failures to fulfill the duties of office that the individual was elected to serve. As well as a specific timeline for the process to take place, the amendment also dictates that the board must immediately report the removal and their rationale to the House of Delegates.

Optometry's Meeting in St. Louis has drawn to a close, but you can still see all that your colleagues experienced from the profession's premier meeting. View AOA's meeting roundup at aoa.org/news.

There couldn't be a more auspicious time for the profession to be in our nation's capital than 2020, and Optometry's Meeting has big plans to capitalize on this once-in-an-ever opportunity. All roads lead to Washington, D.C., in one year's time as Optometry's Meeting 2020 convenes, June 24-28, at the Gaylord National Resort & Convention Center in National Harbor, Maryland.

Stay tuned to aoa.org/news for more information and announcements regarding this unique, extraordinary chance to celebrate and advocate for our profession.

Ready to register for Optometry's Meeting? Enter the registration portal to begin.