February 22, 2017
Demographics changing, but more to be done, trailblazer says. 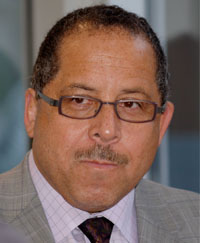 Drs. Marshall and Shipp were college students then, contemplating their futures. Who knew that conversation would shift and shape the history of optometry and the future of black doctors of optometry. Both doctors would be trailblazers. Both would go on to graduate from the IU School of Optometry, become leading educators and administrators and spend distinguished careers advancing the causes of optometry nationally and internationally.

And five decades later, Dr. Marshall—now professor emeritus in both the IU schools of optometry and public health—remembers the conversation well, and his passion around those issues still burns brightly.

"As the U.S. population continues to become more diverse, it is incumbent upon the optometric profession to produce a workforce that is representative of the population it serves," says Dr. Marshall, who was named AOA Optometrist of the Year in 2007 and was inducted into the National Optometry Hall of Fame two years later.

Below, Dr. Marshall shares his thoughts on the past and present for doctors of color.

What happened after your conversation with Dr. Shipp?

So you set out to do something about the lack of diversity?

Following our recommendation, Dr. Strickland created a special minority advisory subcommittee charged with the recruitment of minority students. As I recall, Mel, Calvin and I made contact with a number of historically black colleges and universities (HBCUs) and spent our spring break traveling through the southeast to visit HBCUs and introduce their students to optometry. It was during this trip that we first met C. Clayton Powell, O.D., (one of the founders of the National Optometric Association for doctors of color; Dr. Marshall is a former NOA president).

Once you graduated, what other avenues did you pursue to help erase health disparities?

When I joined the faculty, one of my first responsibilities was co-authoring a federal grant application with Jack Bennett, O.D., to establish an off-campus clinic in a low-income and underserved area of Bloomington. Ultimately, the clinic became a highly valued community resource. I served as the director of the Community Care Center for five years. I then transitioned from direct patient care to expanding my efforts to affect changes in state and national policies directed at health care access and the elimination of racial and ethnic health disparities, especially disparities in eye and vision care.

I also was successful with another faculty member in securing a federal grant to create the six-week Indiana University Summer Institute in the Health Related Professions. For 17 years, the institute served as the major vehicle for increasing student diversity in the school. Students who participated in the institute and graduated from the IU School of Optometry have distinguished themselves in numerous ways.

What other changes have you seen? Are you happy with the pace of change?

Over my career, I have witnessed significant changes in the profession, from the curriculum to scope of practice, technology and demographics of the workforce. Demographically, the representation of females in the profession has increased tremendously. However, in regard to African-American, Hispanic-American and Native American representation, changes have been only modest when benchmarked against the overall population. The racial, ethnic and cultural dynamics of the population demand an optometric profession that is conversant with the needs, beliefs, values, customs, preferences and expectations inherent within its diversity.

As 2020 concludes, the AOA’s Board of Trustees reflects on a year of unparalleled challenges and tireless resiliency as 2021 begins with promise.

The Atlanta doctor of optometry and civil rights advocate fought to open doors for Black students interested in the profession, including helping to found the National Optometric Association.

James A. Boucher, O.D., 83, founded his practice in Laramie, Wyoming, and served the community for five decades. Dr. Boucher specialized in cornea and contact lenses practice.