October 28, 2020
The Atlanta doctor of optometry and civil rights advocate fought to open doors for Black students interested in the profession, including helping to found the National Optometric Association. 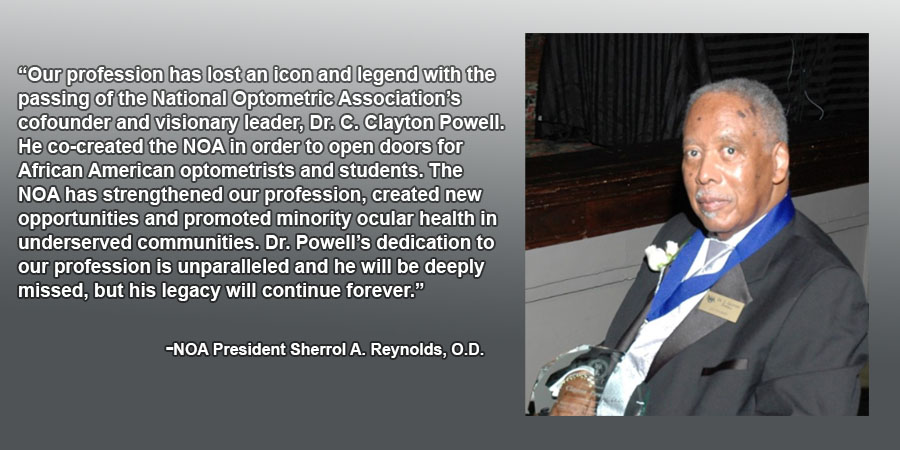 Clayton Powell, O.D., of Atlanta, died on Friday, Oct. 23, leaving an esteemed legacy as a local civil rights advocate and a champion for the inclusion of Black students and doctors in the field of optometry. A cofounder and past president of the National Optometric Association (NOA), Dr. Powell was 93 at the time of his passing.

A 1949 graduate of Morehouse College in Atlanta, Dr. Powell attended the Illinois College of Optometry (formerly Chicago College of Optometry), where he was the only Black student in his class. Editor of the Eyes Right newspaper and active in multiple fraternities, Dr. Powell graduated and returned to Georgia in 1953. There, he became not only the first Black doctor of optometry to join the Georgia Optometric Association but also the first doctor of optometry to head the Atlanta Southside Comprehensive Health Center. He would later be distinguished as the first Black doctor of optometry appointed to the National Eye Institute.

Active in the Atlanta chapter of the NAACP, Dr. Powell would eventually become vice president, where he filed cases to desegregate Atlanta Public Schools, reportedly working alongside future U.S. Supreme Court Justice Thurgood Marshall. Dr. Powell would go on to become a charter member of the Development Authority of Fulton County, serving as chair and executive director for periods of time.

Fifty years later, the NOA has provided nearly $25 million in scholarships for students’ educational opportunities in optometry. For these efforts and more, both Drs. Powell and Howlette were inducted into the National Optometry Hall of Fame in 2001.

“Our profession has lost an icon and legend with the passing of the National Optometric Association’s cofounder and visionary leader, Dr. C. Clayton Powell,” says NOA President Sherrol A. Reynolds, O.D. “He co-created the NOA in order to open doors for African American optometrists and students. The NOA has strengthened our profession, created new opportunities and promoted minority ocular health in underserved communities. Dr. Powell’s dedication to our profession is unparalleled and he will be deeply missed, but his legacy will continue forever.”

Recognizing the organizations’ intertwining histories, the AOA has redoubled its commitment to working together with the NOA to further diversify and advance our profession. Recently, Jacquie Bowen, O.D., AOA trustee and chair of the AOA’s board-level Diversity and Inclusivity Task Force, joined alongside Dr. Reynolds in a virtual discussion about race in optometry. Dr. Bowen reiterated that a sustained commitment is necessary to support the mission that Dr. Powell so diligently championed for half a century at the NOA.

“It’s incredible to think of all the changes that Dr. Powell saw in his lifetime, not only in our country but also in our profession,” Dr. Bowen says. “He was a man who found solutions to problems and he was fearless when it came to pursuing new experiences. I hope we all honor his legacy by continuing the work he began toward expanding diversity in optometry and creating an environment where all are heard, and all perspectives are equally valued.”

Powell is survived by his wife, Deborah Powell, and their family.