Civil rights leader remembered as ‘brave, heroic and selfless’ by one doctor of optometry 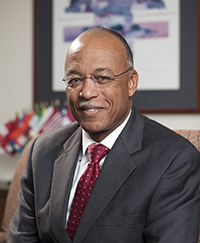 By the time Dr. Shipp graduated from high school in 1966, Dr. King had helped lead the March on Washington three years before, and the ink was barely dry on the Voting Rights Act of 1965.

"My parents were heavily influential in my life," says Dr. Shipp, who was inducted into the National Optometry Hall of Fame in 2002. "And there were many, many people whose shoulders I stood upon to help me along the way.

"But Dr. King was clearly an influence on my life," says Dr. Shipp, who plans to attend an MLK celebration in a suburb of Phoenix, Arizona, on this national observance. "For me, he set a standard. I never had the expectation that I would be able to do the things he did but I wanted to help people, especially the underserved and disadvantaged. In a subtle way, there was this inspiration to facilitate some of the things he was advocating."

Dr. Shipp would blaze his own trail.

AOA's 2012 Optometrist of the Year, Dr. Shipp was called an "exemplary ambassador for all of optometry." He was the first doctor of optometry to serve as president of the American Public Health Association and served on several national councils for such organizations as the U.S. Food and Drug Administration, the National Eye Institute and the Centers for Disease Control and Prevention.

Over his 42-year career in optometry, Dr. Shipp's passion was serving people with limited access to eye and vision services by developing the next generation of doctors of optometry willing to serve individual in underserved communities. Recruiting diverse faculty and students was a particular purpose. For a decade, he helped mold young minds as dean of The Ohio State University College of Optometry. Before that, he was a faculty member for over 20 years at the University of Alabama at Birmingham School of Optometry.

Below, Dr. Shipp shares what today's national observance means to him.

What is your first memory of the civil rights leader?

I was in high school when I was first made really aware, by my parents, of what Dr. King was doing. I was a military brat and our family was living in Germany. By virtue of my father being in the Army, I did not experience the in-your-face discrimination that existed at the time in the U.S. Like many people, though, I had a great deal of admiration and respect for Dr. King and what he was doing. He was insisting that our country live up to its promise of liberty and justice for all. I found him to be exceptionally brave, heroic and selfless.

What kind of influence did Dr. King's commitment and sacrifices have on your life?

In college, at Indiana University, I participated in a number of events related to social justice and affirmative action on campus. Dr. King's actions, and the fact that he accomplished all he did before the age of 40, were exceptional for a very short life. He was a role model. I knew I wanted to support young people, especially those with challenging circumstances. My aspiration was to be of service to people, particularly those with unmet needs. Health services was a natural consideration for me because I had a strong interest in science."

How does optometry fit into your view of service?

One of my mantras is not to just do something to do something. I ask myself, "So what if you do that? What difference does that make?" As things were evolving in my career, initially, I was providing health services but I was doing it one-on-one. I wanted to multiply that. How do you do that? You create more providers who are likely to provide health services. Dr. King was trying to make a difference and help this country realize its goals and objectives. I think we are still struggling as a country to achieve his vision.