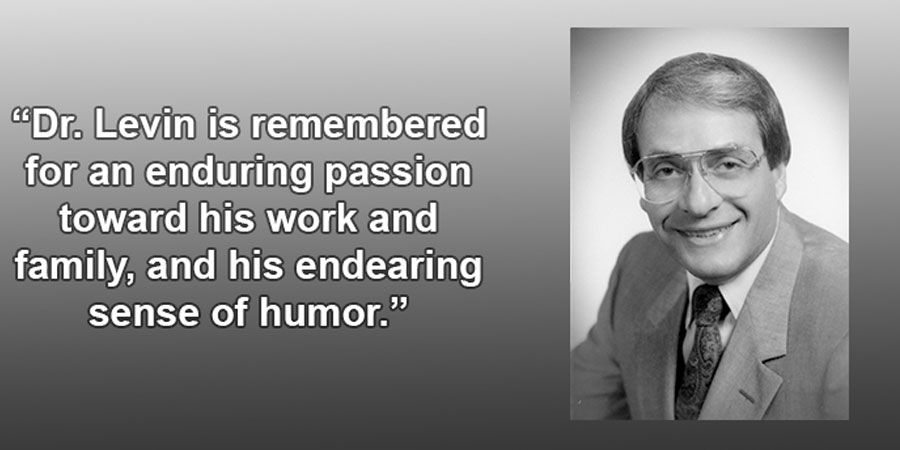 It is with great sadness that AOA remembers our 58th president, Alvin Levin, O.D., 89, upon his passing on Aug. 4, 2017. An optometric leader and advocate, Dr. Levin is remembered for an enduring passion toward his work and family, and his endearing sense of humor.

Most recently a resident of Rhode Island, Dr. Levin is remembered for his contributions in Pennsylvania, and later Arizona. Born in Pottstown, Pa., Dr. Levin served briefly in the U.S. Army during World War II before attending and graduating from Pennsylvania College of Optometry in 1951. From there he joined his uncle's optometric practice in Carlisle, Pa. Here, Dr. Alvin made his name, practicing in the community-and in nearby Dillsburg, Pa.-for three decades.

At the 58th AOA Congress in Anaheim, Calif., in 1979, Dr. Levin was named AOA president. During his time in Pennsylvania, he earned the Pennsylvania Optometric Association's (POA's) Central "Man of the Year" award in 1962, as well as POA Optometrist of the Year in 1982.

At that point, Dr. Levin and his family relocated to Scottsdale, Az., where Dr. Levin became Arizona Optometric Association (AZOA) executive director in 1984. He held that position until 1999, receiving Arizona's Optometrist of the Year award that year. Even after retiring from AZOA, Dr. Levin continued to provide optometric care to indigent Arizonans. He was awarded the AZOA's Lifetime Achievement Award in 2013.

Dr. Levin's obituary notes: "He loved being an optometrist and everything about the profession. As president of the AOA, he and [his wife, Arden] traveled the world representing optometry. He was very proud of his 1980 debate with Ralph Nader regarding optometric issues."

Bruce May, O.D., POA past president, holds the distinction of delivering both Dr. Levin's POA and AOA presidency nominating speeches. He still recalls his "ABCs of Dr. Levin" and "The I's of Dr. Levin," speeches where Dr. May's acrostic provided a snapshot of the man.

"How do you capsulize a man like Dr. Al Levin? In a few words, it's impossible, but passion, integrity and honesty, with both humility and nobility, come quickly to mind," Dr. May says. "Love of life, family and his chosen profession pretty much tell the story of this great man and leader. Those who knew him will never forget him, nor would they want to."

Dr. May's path crossed Dr. Levin whilst still in the U.S. Army, stationed at Carlisle. It was Dr. Levin who pushed Dr. May into the AOA and eventual leadership roles, he says, and there's one particular leadership function, Dr. May will never forget.

Prior to Dr. Levin's AOA presidency, the Board of Trustees visited the POA Congress. Here, unbeknownst to Dr. Levin-and many of the attendees-the POA and AOA boards planned an impromptu roast, in good jest, and Dr. Levin's humor won the day.

"His good sense of humor was why we were doing it in the first place," Dr. May recalls. "He was one of the most caring men I've known. He was warm, and everybody loved him. He had that sense of what the whole profession is about-not just one element-and he was part of that group that was instrumental in moving the profession forward in many different ways."

One way Dr. Levin had a "sense of the whole profession" was as it related to the role of paraoptometrics in the optometric practice, says Harvey Hanlen, O.D., AOA's 78 th president and POA past president. Dr. Hanlen recalls how Dr. Levin espoused the phrase "paraoptometrics are an extension of the doctor to the patient," and his influence on the paraoptometric guidelines that Pennsylvania adopted more than three decades ago.

Dr. Levin was forward-thinking in that regard, and certainly a major actor in shaping optometry as it is today, Dr. Hanlen says, who adds he was "blessed" to count Dr. Levin as a trusted friend and mentor.

"When I needed advice, whether professionally or organizationally, I would go to Al because he was one of the most level-headed and kind individuals who certainly knew how to make his point effectively and deliberately," Dr. Hanlen says. "We're losing more and more of our professional icons, and I'd count Al among them. He was a special person."

"Dr. Levin will be dearly missed by myself and many of the AZOA past presidents and members that he touched," said AZOA Executive Director Stacey Meier, O.D. "Al was our executive director when I was state president, and I considered him to be a good friend, mentor and role model. With Dr. Levin's leadership, Arizona won some of its great legislative battles and we will be forever grateful for the time he spent with us."

Donald Jarnagin, O.D., Midwestern University's Arizona College of Optometry dean and AOA's 74th president (1995-96), echoes the sentiments of both Drs. May and Meier.

"Dr. Levin was a true gentleman and professional in all his dealing with optometric peers, public, elected officials and especially paraoptometrics and techs who he took a great pleasure in providing educational sessions for," Dr. Jarnagin says. "He was also a great mentor to me and others involved in AOA activities and was greatly responsible for my election to AOA Board of Trustees in 1987. He did me a big personal favor in doing the installation ceremonies at the 1995 House of Delegates for the AOA officers and trustees. The profession of optometry and AOA are both in a better place because of Dr. Al Levin."