July 12, 2018
Still hooked on cooking, despite elimination on MasterChef 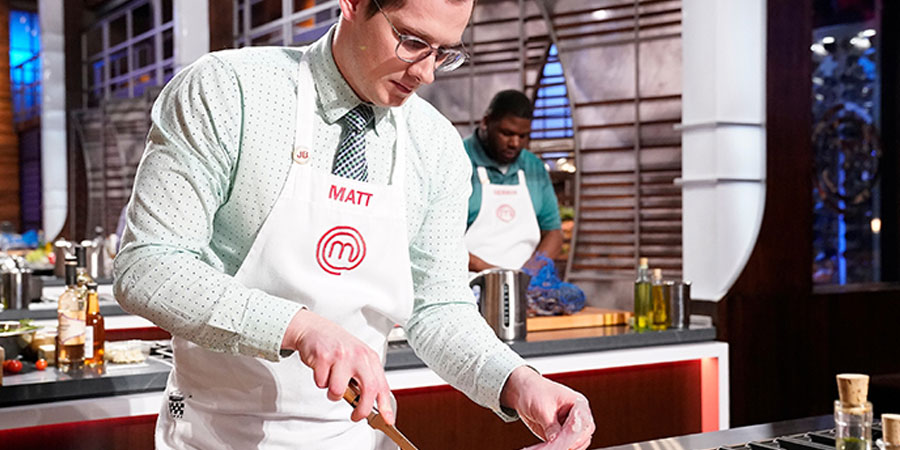 The spectacle of Matthew Houck, O.D., competing on the popular cooking show "MasterChef" ended July 18. Dr. Houck was filleted by a seafood challenge.

The Iowa City, Iowa, doctor of optometry survived a national search for the top 23 home chefs and then several episodes. He made it through to the top 17. On Thursday, he thanked doctors of optometry and others fans of the show for their support and reflected on his time on the show.

"It was so much fun but, in the end, I came up a little bit short," Dr. Houck said. "The ingredients in the mystery box were not ingredients I was familiar or comfortable with. I tried to make a bunch of individual elements pair together and it just didn't work. I'm proud of the dish I made, but I probably wouldn't ever make it given different circumstances.

"Being in MasterChef was one of the most difficult things I've ever done," he added. "Not difficult in the sense of optometry boards knowledge, but difficult in the acute stress and adrenaline that you're constantly battling while in the kitchen. The stress and pressure in there is real and not just TV magic. Even though my exit was way short of the coveted 'MasterChef' title, I'm excited to de-stress and focus on optometry again. It's also nice to be cooking at home without the stress. I think, if anything, I hope I showed that despite your career you can pursue other interests and hobbies too. Flexibility is one of the best benefits of being a doctor of optometry. I wouldn't trade it for the world."

Dr. Houck has appeared in seven episodes, including the show's May 30 season opener of the series, which was filmed earlier this year. So far, he has survived elimination rounds by cooking dishes such as crab Benedict and a pan-seared cod with apple and fennel, turnip puree, pickled carrots and a lemon beurre blanc.

"I'm an optometrist, so how things look is important to me," he told the show's judges as he raced against the clock and his fellow competitors in an earlier episode.

For the first time ever on the show, the judges—host and award—winning chef Ramsay, acclaimed chef Aarón Sánchez and renowned restaurateur Joe Bastianich—presented their favorite home cooks with coveted white aprons and will mentor them throughout the competition.

During the opener, Sánchez gave out three aprons—but Dr. Houck did not receive one. Until Bastianich stepped forward, that is.

"Aarón, you gave out three aprons, but I'm going to give out just one apron," Bastianich said, strolling toward the home cooks. "In my opinion, Aarón neglected the best cook here."

Bastianich then handed an apron to a visibly relieved and pleased Dr. Houck. The doctor admitted to being intimidated, though honored, by Bastianich's choice.

"It was incredible to watch myself and the other great amateur chefs from all around America cook for the judges," Dr. Houck said after that episode aired. "It's difficult to summarize in words how excited I am to be moving forward in the competition. It's been a dream of mine for these past two years to be in the position I am in now, and I cannot wait to see what's next."

Dr. Houck could not reveal what will happen as the show runs its course on Wednesdays on FOX, but he encourages supporters to tune in again to see how he fares in the competition.

Cooking up a dream

Dr. Houck started cooking after graduating from Indiana University School of Optometry in 2016.

"It became something that I was passionate about, much like optometry," says Dr. Houck, whose trademark is his impeccable and creative plating. "At first, I appreciated the art of cooking, but that slowly grew into an interest in the other aspects of the culinary scene."

So, when "MasterChef" auditions came to Nashville, Tennessee, he jumped at the chance. From the thousands of home cooks who auditioned, 43 were selected to compete on the show, which will chop the number to 24 who will compete head to head in the coming weeks. Home cooks on the show include a bus driver, an English teacher, a drummer, a pilot and a realtor.

"I felt that it was time to test my culinary skills with other amateur chefs around the U.S," Dr. Houck says. "I have not been around many other amateur cooks to know where I stand with my cooking skills. It is all up in the air at this point."

How does he see optometry fitting in to the competition?

"Cooking is a visual art and optometry protects the visual system," Dr. Houck says. "Making sure people see things accurately and beautifully is something I've strived to do in practice and my cooking."

The AOA’s 2022 Paraoptometric of the Year is always looking to advance herself and her colleagues to the next level.