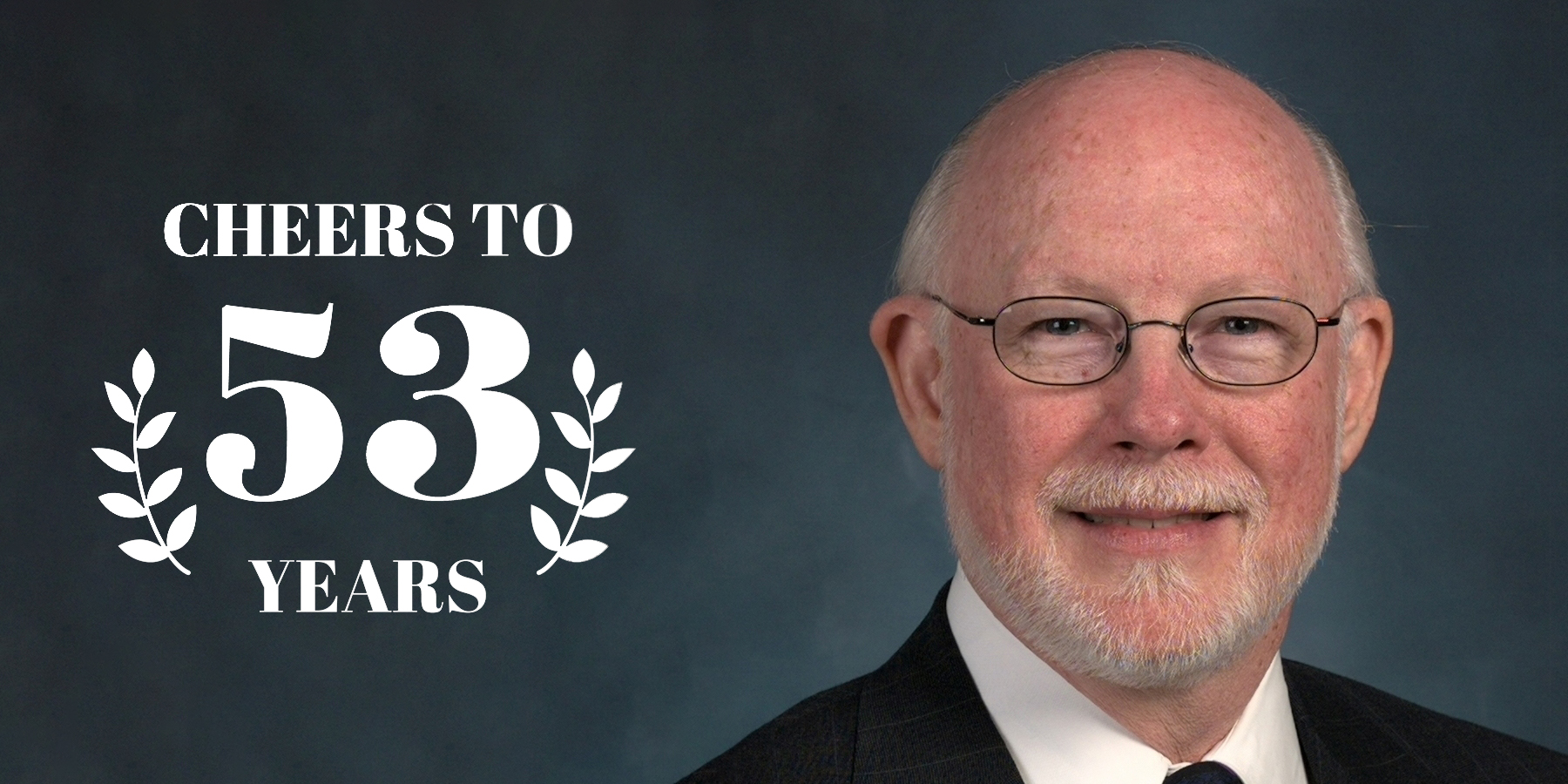 A stalwart for pediatric optometry whose profound impact continues to shape the profession’s future, Glen T. Steele, O.D., was recently honored by friends and colleagues alike for a distinguished career. 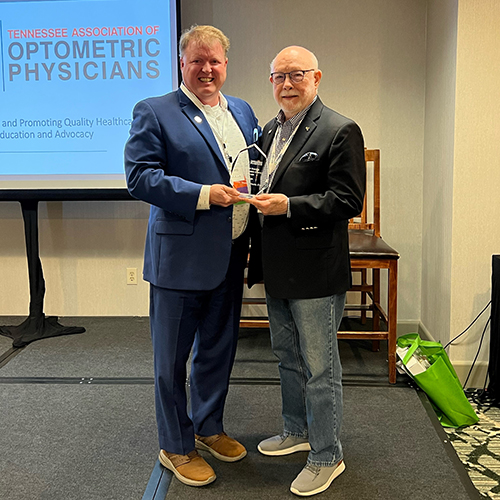 Fondly known profession wide as “Bubba,” Dr. Steele announced his retirement from the Southern College of Optometry (SCO) in August and was formally recognized in a resolution before the Tennessee Association of Optometric Physicians’ (TAOP’s) Annual Congress in Gatlinburg, Tennessee, on Oct. 15. The resolution noted not only his more than 53 years serving on faculty at the Southern College of Optometry (SCO) but also his enduring commitment to pediatric eye and vision care and professional advocacy. A longtime member of the TAOP, Dr. Steele also was presented the association’s Dr. Jeff Foster Distinguished Service Award by TAOP Chair of the Board Amanda Dellinger, O.D.

“Dr. Steele is truly an optometric treasure,” Dr. Dellinger said in presenting the award, recognizing Dr. Steele’s lifetime of service. “Few things supersede his impact on our profession and patient care. They consist of his gentle spirit, sense of humor and smile! I am forever grateful to have him as a mentor.”

An SCO graduate himself—class of 1969—Dr. Steele has committed his career and life to furthering the profession of optometry by providing guidance and training to generations of doctors of optometry. In addition to his SCO service, Dr. Steele is a renowned lecturer in the U.S. and internationally, particularly in the areas of infant and child vision development, pediatric eye examination, and the diagnosis and management of pediatric eye disease.

Notably, Dr. Steele pioneered the InfantSEE® program alongside former President Jimmy Carter. InfantSEE, a public health program managed by Optometry Cares®—The AOA Foundation, is designed to ensure that eye and vision care becomes an integral part of infant wellness care to improve a child’s quality of life. Since the program’s launch, InfantSEE has reported over 160,000 assessments and helped identify over 18,000 eye and vision conditions with over 13,700 anomalies identified for further follow-up.

Dedicating more than 15 years of service to the AOA as InfantSEE chair and 17 years as a member of the Children’s Vision Committee, Dr. Steele still found time to advocate and help advance the practice of optometry. In addition to being recognized as Tennessee’s Optometrist of the Year in 1999, he was inducted into the prestigious National Optometry Hall of Fame in 2019 and presented with the Dr. W. David Sullins, Jr., InfantSEE Award in 2022. He has received the AOA President’s Award, as well as SCO’s Lifetime Achievement Award among many other distinctions.

In an upcoming interview for AOA Focus magazine, Dr. Steele reflects on his 53+ years at SCO and how much the profession has advanced in that time.

“When I graduated, neither I nor most of my instructors could place an anesthetic drop in a patient’s eye prior to doing Schiotz Tonometry. However, one instructor could instill a drop because he was a registered nurse,” Dr. Steele recalls. “Now, we have not only states providing laser procedures but also states with autonomy in determining the scope of optometric practice. This is a huge change.”

A legacy of mentorship, pediatric care and advocacy

Dr. Steele’s legacy includes the more than 6,000 optometry students he has taught at SCO as the school’s longest-serving faculty member, as well as the innumerable colleagues and others who have crossed paths with him.

“No other faculty member in the 90-year history of SCO has had more of an impact on the college than Professor Glen ‘Bubba’ Steele. In fact, his legacy will continue for decades to come through the generations of students he taught, international lectures he has given and in the promotion of the InfantSEE program he helped to create,” says Lewis Reich, O.D., Ph.D., SCO president.

Says Katherine Laney, O.D.: “It is a rare individual who daily and consistently lives out the way he or she thinks or speaks. Dr. Steele is one such individual that his foundational beliefs permeate his character and his consistency and passion reveal his heart—and it’s a big heart.”

Zachary McCarty, O.D., TAOP member and AOA Quality Improvement and Data Committee chair, recalls attending his first-ever TAOP meeting after relocating to Tennessee where he met “the true living legend.” Time and again since, Dr. Steele has demonstrated his passion for advocating for the profession and patients, Dr. McCarty says.

“Whether in the halls of the state capital in Nashville or in the U.S. Capitol in Washington, D.C., Dr. Steele was quick to take us younger doctors under his wing and help show us how to speak with our legislators and explain the importance of what we do as optometrists,” Dr. McCarty says. “Optometry, especially with regard to children’s vision, in the state of Tennessee and the greater U.S. wouldn’t be where it is today if it wasn’t for Dr. Bubba Steele. It has been an honor to work with him, and I hope nothing but the best for him in his retirement.”

Adds TAOP President Emily Eisenhower, O.D.: “To say that Dr. Glen Steele is a legend in optometry would be an understatement. His expertise and passion for pediatric optometry is a gift that has been shared and taught around the world.”