September 16, 2020
The Pennsylvania doctor of optometry practiced for 46 years in Beaver Falls. But Dr. Bennett’s vision had an impact there and beyond. 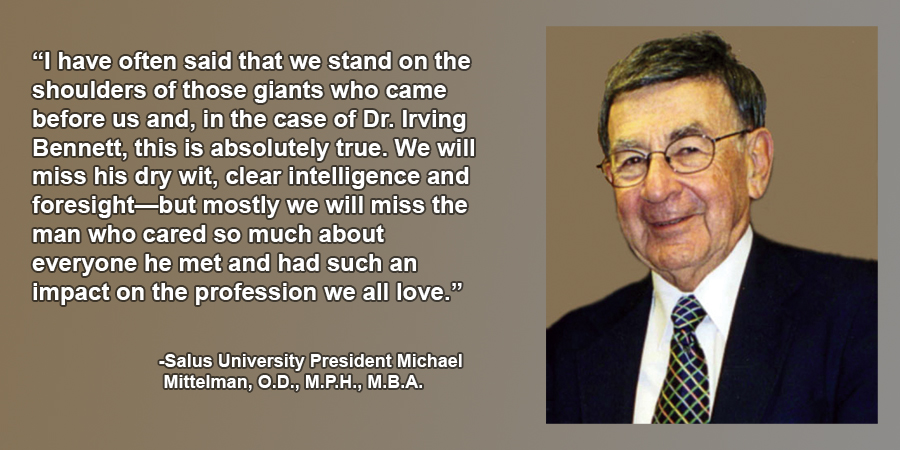 Irving Bennett, O.D., who died Sept. 7, spent his 46-year optometric career practicing, advocating for and writing about his passion: optometry. A lifetime member of the AOA, he was 97 at his passing.

Dr. Bennett was named the AOA's Optometrist of the Year in 1973, and in 1996, received its Distinguished Service Award. He was inducted into the National Optometry Hall of Fame in 2004.

He is remembered this week for his dedication and many contributions to the profession. Dr. Bennett practiced optometry in Beaver Falls, Pennsylvania, for 46 years (1946-1992). His influence extended far beyond though. He was described as “instrumental” in the founding of the publication Optometric Management, OptiFair (a forerunner to Vision Expo) and InfantSEE ®, a public health program managed by Optometry Cares ®—The AOA Foundation .

“Every once in a while, you meet a person who you just know has that something very special who can influence, challenge and ultimately create a new normal,” says Salus University President Michael Mittelman, O.D., M.P.H., M.B.A., of Dr. Bennett, who graduated from the Pennsylvania College of Optometry (now Salus University) in 1944.

“Dr. Bennett was such a person,” Dr. Mittelman adds.

Serving on several AOA committees over his long career, Dr. Bennett is credited with establishing the AOA Ophthalmic Council, being the first chair of the AOA Industry Relations Committee, as well as being instrumental in modernizing Optometry Cares and more.

Glen Steele, O.D., recalls his ground-laying contribution to the creation of InfantSEE, which was designed to ensure that eye and vision care become an essential part of infant wellness. Under the program, participating doctors of optometry provide comprehensive eye assessments to infants between 6 and 12 months of age at no costs, setting them on a lifetime course of eye and vision health.

“Dr. Bennett was a member of the Operation Bright Start Committee formed to provide examinations for infants,” says Dr. Steele, a professor at Southern College of Optometry who was inducted in the National Optometry Hall of Fame in 2019. “This initial program eventually evolved into InfantSEE. Dr. Bennett was a stickler for detail, which is what was needed to ensure that the viability and direction were good for patients and that it would be sustainable. Obviously, there were a number of changes in the program as it became InfantSEE, but he was a part of the foundation of the program.

“Being able to sit in the same room with Dr. Bennett, Dr. Richard Hopping, Dr. Norman Haffner, Sam Galloway and Dr. David Sullins and see their commitment to the full scope of the profession was very inspiring,” Dr. Steele says. “I was able to expand my understanding of the organizational side of optometry with this group of thinkers.”

Dr. Bennett was not only a witness to optometric history, he was a willing participant and chronicler of it.

In his many writings, Dr. Bennett championed the business side of practicing, successfully managing practices, and a heightened role for optometry in health care. Through a publishing company he started, he is credited with having a hand in the founding of a number of magazines: Optometric Management, Contact Lens Forum, Ophthalmology Management, and Optical Management.

Well into his 90s, he was contributing to Hindsight: The Journal of Optometry History, published by the Optometric Historical Society. Former editor (1957-1964) of the now-defunct Journal of the American Optometric Association, Dr. Bennett’s last piece for Hindsight, “The Year OHS Began: the Year 1969,” appeared in January 2019 and provided a firsthand accounting of OHS’ founding and the birth of the movement to transform optometry through scope expansion—a radical notion for the profession at the time.

You can find several of Dr. Bennet's pieces, including such topics as “Optometrist Jailed for Charging an Exam Fee” and “Getting Insurance Companies to Pay for Vision Therapy.”

“Among the many things Dr. Irving Bennett did for optometry was his work for the Optometric Historical Society,” says David Goss, O.D, Ph.D., Hindsight editor. “He felt strongly that the history of optometry should be preserved. Between 2007 and 2019, he contributed 26 articles to Hindsight. He was president of OHS from 2009 to 2012. During his presidency, he negotiated the current relationship of OHS and Optometry Cares. Beyond that, he was a wonderful colleague, always offering encouragement and showing appreciation.”

Dr. Mittelman calls Dr. Bennett “truly a pioneer of the optometric profession.” They spoke frequently, their conversations about the direction of optometric education.

“His vision and passion for optometry was surpassed only by his drive to ensure his vision was realized. Dr. Bennett was a trailblazer who helped to propel the optometric profession into the 21st century. By skillfully introducing much-needed business acumen into our daily vernacular through innovative ideas such as OptiFair, Optometric Management, Contact Lens Forum, Ophthalmology Management, and Optical Management, Dr. Bennett helped to transform the way optometry learned, networked and interacted with other professions.

“I have often said that we stand on the shoulders of those giants who came before us and, in the case of Dr. Irving Bennett, this is absolutely true. We will miss his dry wit, clear intelligence and foresight—but mostly we will miss the man who cared so much about everyone he met and had such an impact on the profession we all love.”

Melvin “Bud” Lilly, O.D., had a front-row seat to Dr. Bennett’s passion for the profession. They practiced together for many years. He noted how representatives from companies around the world would travel to Beaver Falls, seeking his sage advice. They’d also eagerly await his State of the Ophthalmic Industry reports, which he delivered annually for many years, Dr. Lilly says.
“He was definitely a visionary and was able to foresee issues and events ahead of most,” Dr. Lilly observes. “Once he sensed what needed to happen, he found a way to make it happen. He was a problem solver in a very practical way. He was a hard worker and left nothing to chance.

Mostly, though, Dr. Lilly recalls him as his friend, confidant, role model and “second father.”

“Irv was extremely honorable,” Dr. Lilly says. “I have known no one whom I would trust more than I would him, regardless of the situation. There will be a giant void in my life as a result of his passing.”

Dr. Bennett, who grew up in New York state and served as an optometrist in the Army Air Forces Medical Corps, retired to Sarasota, Florida. He is survived by his wife, Trude; a son, Donald Bennett, O.D., M.D.; a daughter, Linda Bennett, O.D.; and granddaughter, Rebecca Bennett Maida, O.D., among others.

Donations in Dr. Bennett’s honor can be made to the Jewish Federation of Sarasota-Manatee. To make contributions to Optometry Cares in memory of Dr. Bennett and to honor his commitment to community health programs such as InfantSEE, please click Optometry Cares donation page.

A detailed obituary can be found at toalebrothers.com/obituaries/Irving-Bennett-2.