October 8, 2018
Frank Fontana, O.D., passed away, leaving behind a lifetime legacy as a profession leader and advocate. 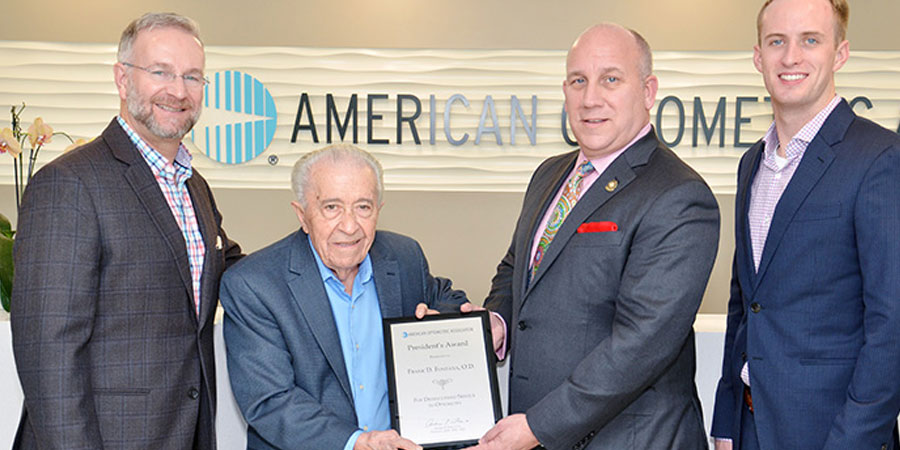 It is with great sadness that the AOA notes the passing of Frank Fontana, O.D., 96, on Oct. 3, 2018. A longtime AOA volunteer and optometric luminary, Dr. Fontana—affectionately known as "Uncle Frank" by friends and colleagues—is remembered for his enduring enthusiasm and passion for a profession he helped shape across nearly seven decades.

A St. Louis, Missouri, native, Dr. Fontana was drafted into the U.S. Army in 1943 and became a supply sergeant in a medical battalion during World War II. Decorated for his actions in Europe, Dr. Fontana would use his GI Bill to graduate from Illinois College of Optometry in 1949. Only a year later, Dr. Fontana would open his practice in St. Louis and specialize in contact lenses.

A pioneer in the field, Dr. Fontana published countless articles and clinical investigations related to contact lenses, in addition to consulting and lecturing on the topic throughout his career. He was named chair of AOA's then-Contact Lens Committee in 1979 and was co-founder of AOA's Contact Lens Section before chairing the section in 1983.

An active volunteer in his local optometric society, the Missouri Optometric Association and AOA, Dr. Fontana served on AOA's Communications Committee and joined the Optometry's Meeting® Exhibit Committee in 1999, serving there for over a decade.

His extensive expertise earned him editorial positions with many trade publications, as well as adjunct teaching and researcher positions at both the University of Missouri-St. Louis College of Optometry and Washington University School of Medicine.

Inducted into the National Optometry Hall of Fame in 2012, Dr. Fontana was awarded the AOA Contact Lens and Cornea Section (CLCS) Legend Award, the AOA Contact Lens Section Man of the Year Achievement, and countless other industry recognitions throughout his career. Additionally, Dr. Fontana was awarded the AOA President's Award for a lifetime of distinguished service to the profession in October 2017.

In remembering Dr. Fontana, Sean Mulqueeny, O.D., recalls not only an optometric forerunner in contact lenses, but also a personal mentor and friend. Dr. Mulqueeny says no single individual had a greater impact on his career than Dr. Fontana—and likely innumerable others can say the same.

"Frank Fontana's contributions to optometry are immeasurable," Dr. Mulqueeny says. "His impact clinically, in research and as a political advocate were instrumental in shaping the profession as we know it today."

A foundation of many groups, meetings or collaborations, Dr. Fontana left his mark on the profession and it's one of those circumstances in the 1980s that epitomizes him, Dr. Mulqueeny says. In creating a collaborative think tank with local ophthalmologists and doctors of optometrys, called the MD-OD Contact Lens Foundation of St. Louis, Dr. Fontana established a collegial group—that continues to this day—where ideas are freely shared among professions.

"The formation of such a group never would have happened without Frank's leadership, humble demeanor and infectious personality," Dr. Mulqueeny says. "Frank's legacy will live on and his career is one that has helped set the standard for all of us."

Adds Edward Bennett, O.D., past chair of AOA CLCS: "Frank Fontana was a true contact lens pioneer, a legendary positive force in communicating the importance of contact lens applications and benefits, and a very deserving member of the National Optometry Hall of Fame. Just as important, he deeply impacted every person he met; they were all greeted with a smile, with very encouraging words and always left feeling better about themselves."

That was the case with Carmen Castellano, O.D., who first met Dr. Fontana in the mid-70s prior to entering optometry school. In the same vein as many others, Dr. Fontana quickly became a professional mentor and friend whose amiable knack left as much a mark on the profession as did his formidable contributions.

"Frank's contributions to our field are formidable and well-documented," Dr. Castellano says. "Although his greatest asset was his people skills. Frank knew everybody and everybody knew 'Uncle Frank.' He had a gift of remembering details about everyone he knew, and he was legendary for being able to tell you the names and ages of the children of people he knew throughout the industry. He loved optometry like few others, and optometry will miss Frank Fontana."

Ronald L. Hopping, O.D., AOA's 91st president, says, "Frank Fontana was loved by many across the country. He was always friendly, inquisitive and he served our profession well not only as a contact lens pioneer, but also as a positive goodwill ambassador."

A viewing is scheduled for 3-8 p.m., Friday, Oct. 12, with a memorial service scheduled for 10 a.m., Saturday, Oct. 13, at the Schrader Funeral Home in Ballwin, Missouri, while a Celebration of Life service is being planned for 2019.