August 18, 2021
Discover how one AOA member’s experiences influenced one of the profession’s most intensely watched scope expansions in recent history. Plus, join an upcoming virtual summit offering optometry’s advocates an opportunity to collaborate on best practices. 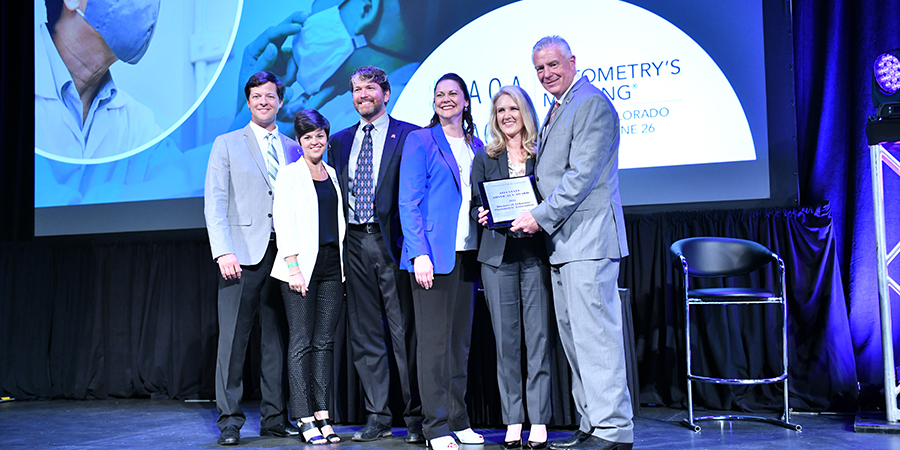 Arkansans for Healthy Eyes received the AOA State Advocacy Award at the 2021 Optometry’s Meeting® in June.

This collaborative, virtual forum is where optometry’s advocates and volunteers can hear the latest, most successful techniques for effective grassroots and state advocacy.

Sheer fervor for optometry motivated Belinda Starkey, O.D., to take the next step out of school and immediately get involved in her profession’s advocacy. As fate would have it, years later that fire would be critically important as Dr. Starkey ascended the Arkansas Optometric Association (ArOA) Board of Directors concurrent to a paradigm shift for optometric patient care in her state.

In 2019, Arkansas’ legislators mulled H.B. 1251, expanding the state’s scope of practice to include contemporary optometric procedures. While that scope expansion would ultimately become law—Act 579—a ballot referendum in 2020 threatened to derail that progress. Once again, Dr. Starkey answered the call and became treasurer of Arkansans for Healthy Eyes, a coalition of doctors and advocates defending the scope law. Despite a protracted fight and legal battle, Arkansas’ scope expansion stood, and Dr. Starkey sought to become one of the first doctors of optometry credentialed under Act 579.

“Her leadership, resolve and emotion toward the passing of H.B. 1251 and the subsequent fight regarding the ballot referendum is evident of her deserving the Optometrist of the Year,” notes Matt Jones, O.D., an ArOA past president.

Named the AOA’s 2021 Optometrist of the Year, Dr. Starkey is an ArOA past president, having also served as chair of the Arkansas Optometric Physicians PAC, a member of the state’s legislative committee and a pioneer of the Networking Optometric Women group to serve female doctors of optometry in the state. She serves on the AOA Industry Relations Committee and works with other state affiliates on their legislative efforts. And in June, she joined the AOA Board of Trustees.

In an excerpt from AOA Focus, Dr. Starkey discusses not only how she became so involved in advocacy but also how those experiences influenced one of the profession’s most intensely watched scope expansions in recent history.

How did you originally get involved in optometric advocacy?

I love this profession! That is why I have been involved in my state association since my time as an optometry student. I learned while still in optometry school that this is indeed a legislated profession and it’s important to always pay attention and vote. It wasn’t until I had been in practice for several years that I realized how important relationships with your legislators really are—now, I’ve developed lasting friendships with some of my legislators. I’ve always had a passion for optometry, and it seemed advocacy was a natural extension of this. My level of involvement leading up to the scope fight increased as I was serving on the association board and then as president during the heat of this battle.

When Arkansas’ scope fight took on national attention, how did that change your advocacy?

With the issue taking national attention, we all knew how important success in Arkansas would be. We knew we needed to win the battle here to set the stage for future passage of scope expansion in other states. We felt that weight on our shoulders. Many state affiliates and doctors across the nation donated financially to our cause and several called to offer guidance along the way. Our scope battle took on more attention when the [ballot] referendum process started. There was more grassroots effort to educate our patients about optometry’s skill set and education and why this law should stand.

How much of Arkansas’ scope fight played out in the public arena vs. a legislative one?

Hopefully, as other states continue passing scope expansion laws, it will be apparent to the public that this is really a non-issue because so many optometric physicians in various states will be successfully performing the procedures allowed in scope expansion.