Pick Up the Pieces

March 13, 2018
In the wake of devastation, the AOA community climbs to extraordinary heights to provide care to patients and to help their fellow doctors of optometry and students rebuild and persist. 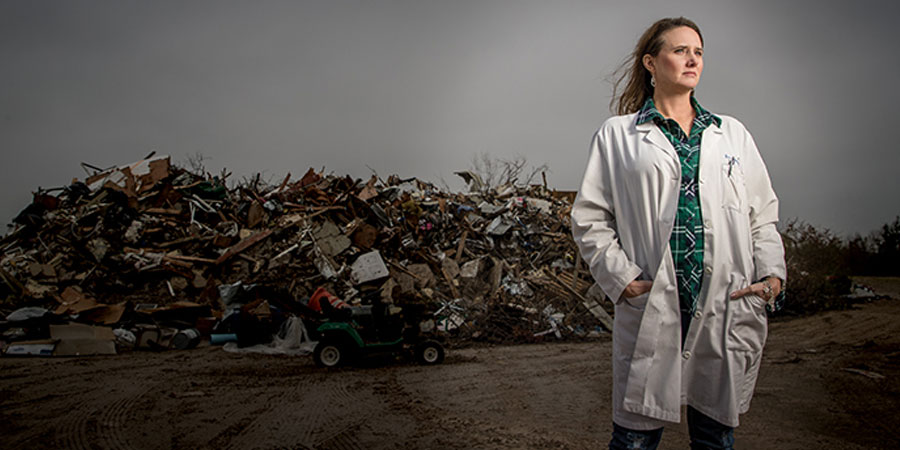 Excerpted from page 24 of the March 2018 edition of AOA Focus.

Her children went to school, her husband went to work, and Dr. Soto arrived at her practice, Rockport Eye Associates, in coastal southern Texas, to a full schedule. All that was out of the ordinary was a possible tropical storm or Category 1 hurricane on the weekend horizon-hardly an emergency for the area.

But by midmorning, Hurricane Harvey was upgraded to Category 3 or higher, with landfall expected the next day. Before lunchtime, school was dismissed and a mandatory evacuation was in effect.

The Soto family spent the next eight hours boarding up their home, Dr. Soto's practice and her husband's office before evacuating to her mother's San Antonio home. They had no idea when they'd return, or what they'd find when they did.

Last year was marked by natural disasters across the United States. From hurricanes in the South to wildfires in the West, doctors of optometry and optometry students all over the country were impacted.

In the wake of the devastation, doctors and students shared their stories about keeping tabs on patients, without power; salvaging flooded and windblown offices; losing key study supplies; wrangling with insurers; and finding relief.

When Dr. Soto returned to Rockport eight days after Hurricane Harvey, her home was in shambles. She and her family shuttled between friends' couches for five weeks before finding a rental house.

She expects her home to be unlivable for a year.

"We're rebuilding the house from the inside out," she says.

Dr. Soto's office fared somewhat better, but the ongoing repairs include dealing with fascia and roof damage, and fixing shingles, sheetrock and insulation. It took three weeks of cleaning-without electricity-to get the practice patient-ready. Dr. Soto used the $4,000 grant she received from Optometry's Fund for Disaster Relief, a program of Optometry Cares ®—The AOA Foundation , to pay for some of the cleanup and repair work, and reopen the practice sooner.

"[The grant] was such a blessing," she says. "My husband and I were crying when we deposited the money."

Before cellular towers were restored, Dr. Soto communicated with family and staff via walkie talkies, and with patients using Facebook. Her post-op patients were sent to nearby Corpus Christi for temporary care. About two weeks after Harvey, Dr. Soto's staff traveled to a Starbucks 30 minutes away-the closest with cell coverage and Wi-Fi-to access records on the cloud, check on patients and reschedule appointments. The office reopened as soon as electricity returned about a month after the hurricane.

Apart from the physical damage, Dr. Soto says her practice has faced a significant loss of income.

"We have about a 33% loss of patients," she says. "They just didn't come back because their homes got destroyed."

The city of Rockport is far from whole, Dr. Soto adds. "It's going to take five to seven years to get the whole town back," she says.

After months in survival mode, Dr. Soto says she's wearing down. But the aftermath of Hurricane Harvey isn't over.

"It's a marathon," she says. "It's been a really big eye opener for me that I cannot go through this quickly."

When it became clear to Ronald L. Hopping, O.D., AOA past president and practitioner in southeast Houston, that his practice would be closed for a couple of days due to Hurricane Harvey, the doctors worked the phones.

"Each of our own doctors took their schedules and called their patients," he says. "I felt like the staff would be asked questions [about contacts or medications, for instance] they couldn't answer."

The day the practice reopened, doctors treated many emergencies, such as eye infections from flood waters and foreign body removals, Dr. Hopping says.

"In those couple of days after the hurricane, you're not doing routine eye exams," he says. "You're doing medical eye care for patients."

Along with helping staff members whose homes were flooded, Dr. Hopping says his doctors did their best to aid patients. One practitioner drove medication to a patient at a shelter. Patients who'd purchased glasses from the practice and lost them in the storm received new pairs for free.

Dr. Hopping says he was fortunate to face no damage to his office-this time.

When Hurricane Ike struck in 2008, his recovery costs hit $1 million, and he received a grant from Optometry's Fund for Disaster Relief. "When your practice is hurt, when you're knocked out, it's going to take the insurance company months to get you any money. You feel alone, all alone," Dr. Hopping says. "The disaster relief fund shows up at your doorstep with some money, [and] it's a reminder that we're all in this together."

Chris Lopez, a fourth-year student at the University of Houston College of Optometry, was relieved that the home in Kemah, Texas, he shares with his wife wasn't flooded by Hurricane Harvey. But when he checked his garage early on Aug. 27 it was submerged in 8 to 10 inches of water. All his books and notes from optometry school had been stored there and were ruined.

"They're really irreplaceable. I consider them a loss," says Lopez, who was able to complete his board examinations in December.

When April Jasper, O.D., prepared to close her practice in West Palm Beach, Florida, before Hurricane Irma, her staff used patient engagement software to email and text the closure notice and distribute the doctor's cellphone number for emergencies. All office calls also were forwarded to Dr. Jasper's cellphone.

"I did have a handful of people call and need help during the storm and after," says Dr. Jasper via email. "There were all kinds of injuries: red eyes and other emergencies."

Several patients rushed into the office for contact lenses after the practice reopened. "They were very appreciative that we stock inventory that they can get immediately," Dr. Jasper says.

Other patients gradually rescheduled appointments. "It is understandable that eye care, unless it is an emergency, is not the priority at a time like this," she says.

It took Kadee Marshall, a second-year student at Inter American University of Puerto Rico (IAUPR) School of Optometry, an entire day to book a flight out of Puerto Rico as Hurricane Maria approached only weeks after Hurricane Irma passed. "It was a nightmare trying to get tickets off the island," she says.

On Sept. 19-a day before Maria made landfall-Marshall made it to her boyfriend's home in California only to soon find herself amid another natural disaster. "I'm coming to California to try to get away [from the hurricane] and there are wildfires left and right," she says.

Marshall spent about a month in California, keeping up with her studies by reviewing lectures and flashcards. When classes resumed in November, IAUPR students had lost about 40 days of school from the two hurricanes.They're making up for it by adding Saturday classes and extending the semester, Marshall says. The clinic and library at IAUPR suffered damage and needed renovations.

At her off-campus apartment, Marshall says she found some moldy shoes, a "gross science experiment" in the refrigerator and so many insects that she wore bug spray inside.

"I got really lucky," she says.

But, Marshall adds, she still spent at least $1,000 on plane tickets, taxis, cleaning supplies and other hurricane-related incidentals.

And weeks after Hurricane Maria, Marshall says electricity in her apartment was still sporadic. In November, she lost power the day before an exam and studied by flashlight the 20 lectures she'd pre-printed.

"Grad school is hard enough," Marshall says, "but when you put in all these factors of no power, no water, no Wi-Fi, the heat and the uncertainty, it's so stressful."

A career firefighter for more than two decades, Tad Buckingham, O.D., a captain with Forest Grove Fire & Rescue in Oregon, says the wildfires that struck the West Coast in 2017 had the biggest impact on the public-including his own patients-that he's ever seen.

Wildfires eject deleterious carbon and dust particles into the air, some only microns in diameter. This fine particulate matter, when inhaled, can cause inflammation, headaches and aggravate respiratory conditions, even in tiny concentrations. So, too, that ever-present smoky haze can wreak havoc on people's eyes, gumming up the ocular surface and causing discomfort.

"It didn't really matter which way the wind was blowing, it came toward us, such that it smelled and looked like you were sitting around a campfire with the smoke drifting in your direction," Dr. DeVleming noted in September.

"It was definitely an air-quality issue as a result of the numerous fires burning up and down the West Coast," says Dr. Buckingham. "A lot of these people are living with palliative care, and the same thing with contact lens patients-they're just getting by. But when you have something like this, as the smoke levels go up, it pushes them over the edge."