May 12, 2022
Glen Steele, O.D., professor of pediatric optometry at Southern College of Optometry, has spent his career of 50+ years spreading the word about children’s vision and eye care worldwide. To honor his contributions, Dr. Steele will receive the 2022 Dr. W. David Sullins, Jr. InfantSEE® Award on June 16 at Optometry’s Meeting®. 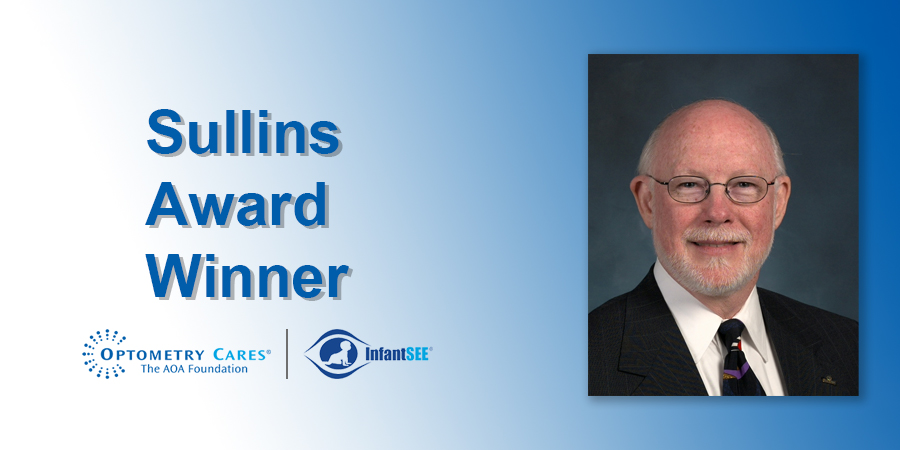 Glen “Bubba” Steele, O.D., personifies the proverb “each one, teach one.”

“‘Bubba’ Steele is one of the most brilliant and well-versed doctors of optometry in the country, if not the world, on the subject of infant vision, infant development and children’s vision. Look at …

How many infants and children he has seen over his more than 50 years in practice.

How many students he has taught over his career at Southern College of Optometry—and how many of them went back into their communities and saw children.

How many doctors he has lectured to and mentored around the country and internationally—and how many of those doctors went back to their communities and saw children.

How many colleges he has spoken at for the InfantSEE program, which he helped start and implement—and how many of those doctors see patients in their communities.

I imagine it’s got to be more than a million children that he has impacted directly or indirectly. But I’m not sure you could really quantify his impact.”

The Sullins Award is given annually to recognize an individual doctor of optometry who has made significant contributions to optometry or his/her community through outstanding public service on behalf of the InfantSEE program.

InfantSEE, a public health program of Optometry Cares®—The AOA Foundation, seeks to ensure that eye and vision care becomes an integral part of infant wellness in order to improve a child's quality of life. Under this program, AOA-member doctors of optometry provide a no-cost, comprehensive eye and vision assessment for infants 6-12 months old, regardless of a family's income or access to insurance coverage. More than 160,000 eye assessments have been reported with thousands of eye and vision conditions identified and either treated or referred for further care.

The award will be presented June 16 at the 2022 Optometry's Meeting® in Chicago at 8 p.m. during the AOA Awards and National Optometry Hall of Fame Induction Ceremony.

Other doctors of optometry might be surprised to know that Dr. Steele, who has had a distinguished career, had never earned the Sullins Award himself, Dr. Zolman says. That’s because members of the committee preferred to shine spotlights on the efforts of others in the wider profession.

That is, until this year. When he joined the April committee meeting late due to choir practice, its members informed him he had won the honor.

“He was surprised,” Dr. Zolman says.

It was a shocking but pleasant development, says Dr. Steele, professor of pediatric optometry at Southern College of Optometry (SCO).

“InfantSEE has been my life, my passion,” he says, “since 1998 (when Drs. Sullins and Steele, both graduates of SCO, co-founded Operation Bright Start, a forerunner to InfantSEE’s founding) when we first started talking about the concept.”

From idea to execution

The idea for InfantSEE was hatched 24 years ago. Dr. Sullins, now deceased, had exited a meeting hall at the Southeastern Educational Congress of Optometry, where they had discussed vision therapy for school-age children. He immediately spotted Dr. Steele and walked over.

“‘Bubba, that’s too late,” Dr. Sullins said then, referring to the term school-age. “What if we started something in the first year of life?”

“That’s what I do—where do we go with it?” Dr. Steele responded.

Well-baby eye assessments may be routine today, but they weren’t then. At a news conference in 2005 at InfantSEE’s launch, Dr. Jens said one of the program’s goals was “changing the culture and mindset of America.”

“There is great satisfaction in doctors of optometry seeing almost 4,000 babies during the pandemic when they were struggling to keep their offices open and keep staff employed,” Dr. Steele says. “That shows me the character of members of our profession. “

The role of vision in learning

An inductee into the National Optometry Hall of Fame in 2019, Dr. Steele had planned to be a contact lens practitioner coming out of college, but one year after graduating from SCO his career took a turn after attending the Gesell Institute of Child Development, where he spent a year. It shaped his career and his life.

At the institute, they saw children from all over the country and Dr. Steele learned from other professionals about the connection between vision and learning, for instance. For him, it underscored the consequence of eye care for the youngest among us and the role of doctors of optometry in delivering that care.

“Just starting with a baby … you put something outside of a baby’s reach,” says Dr. Steele, who has lectured doctors and students on how to give assessments to wiggling babies. “They have to develop that motor coordination, that looking ability to move to get that particular object. But it all starts with vision.

“The visual part of it is a motivation and stimulation to start developing movement, reaching, grasping, learning to crawl to get to something,” he adds. “You don’t just crawl to crawl. You crawl with a purpose. That’s all part of development. And as you grow older and go through the process of development, your purposes become broader and more detailed. Then it leads into learning and then jobs. I call vision the instigator and the leader.”

Make a donation to support Optometry Cares or the InfantSEE program.