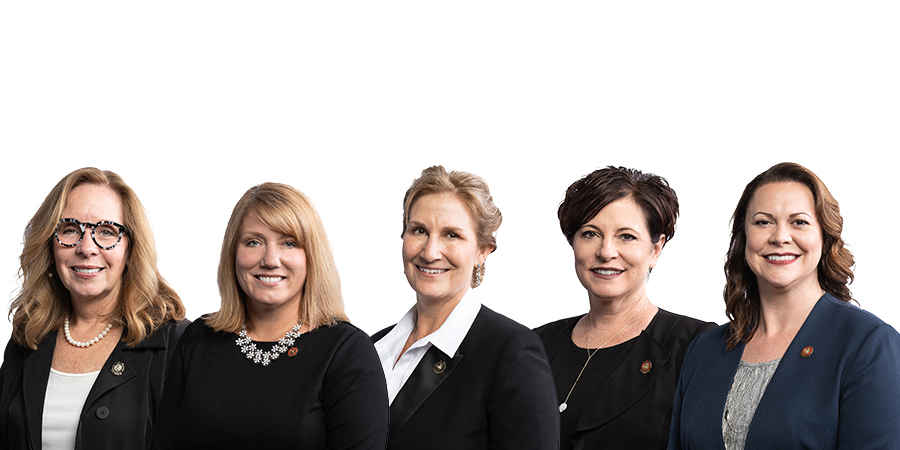 Clearly, optometry is an appealing field for women. As the field evolves, what does this mean for doctors of optometry and their patients? What challenges, if any, have these women faced and what goals do they have for this profession they love? AOA Focus interviewed 10 doctors and optometry students to hear their perspectives. One thing is clear: The future is bright.

What changes have you noticed for women in optometry over your career?

“The days of women being the minority or being unique in the profession? Those days are gone. But more important than numbers, patients are a lot more accepting of women doctors. When I started in practice, many patients assumed that my male optician was ‘Dr. Bowen,’ and a lot of the mail I got was addressed to ‘Dr. and Mrs. Bowen.’ That kind of thing isn’t happening as much anymore.” —Jacquie M. Bowen, O.D., AOA trustee

“I was the first African American female in South Carolina to hold an optometry license in the state. … There are a lot more doors open for women, and we have opened those doors wide open and run through, with leadership roles in every aspect of optometry.” —Angela Abraham, O.D., AOA Leadership Institute committee member

“One of the main things I’ve noticed is this surge in women in leadership that spans across the profession. Being a woman of color, it’s amazing to see this representation of women of all backgrounds. As a woman aspiring to become a leader in the profession, it does make a significant difference to have that representation visible for everyone to see and let them know that this is possible.” —Breanne McGhee, O.D., AOA Leadership Institute committee member

What challenges have you faced as a woman in optometry?

“Combatting the public’s misperception of what a doctor of optometry should look like is still something that we’re facing today. Imagine achieving eight-plus years of postgraduate education and training and you go into an exam room, ready to share your expertise and knowledge, only to have the patient ask, ‘When will the doctor be coming in?’ It happened to me 25 years ago, and it still happens to women today. And I would be remiss if I didn’t talk about the compensation of women optometrists. … There still remains a difference in the pay received by men vs. women in optometry. The bottom line is that employers are offering women lower salaries and women are accepting them.” —Terri A. Gossard, O.D., M.S., AOA trustee

“There really has been a progression that mirrors what we know about this more recent focus on equity, diversity and inclusion. One of the things I experienced over time is that we may not have been taken as seriously, as simple as not being provided effective mentorship and especially sponsorship. Everything from our industry components to our academic representation to business relationships like offering partnerships and practice purchases—we’re now being given a pathway that historically men have always had.” —Lori L. Grover, O.D., Ph.D., AOA trustee

“I was only the second female in our practice 25 years ago, and now we’ve grown to 18 doctors. Thankfully, our practice has evolved with accommodating work-life balance. I had a toddler at the time, and I was pregnant with my second child and only took two weeks off after childbirth. Now, we’re much more compassionate with both male and female doctors needing to take more time off and be more family-oriented.” —Teri K. Geist, O.D., AOA trustee

“In a previous leadership role, I had some challenges that would not have existed if I was not a woman. … Regardless of my intelligence, aptitude or abilities, I heard more than once people assumed I got a position or a promotion because I am pretty. It bothered me so much that I began to purposely try to tone down my appearance by wearing my hair in a tight bun or not wearing makeup. It took some toughening up to become as comfortable in my skin as I am now.” —Roya Attar, O.D., AOA Leadership Institute committee member

How can women doctors support one another?

“Perhaps women are accepting lower salaries than men because of a lack of salary transparency, so it’s important for female optometrists to know their value. If we look to research and social theory, women are more hesitant to initiate negotiations, so let’s have these kind of talks, recognize this and see what kind of resources we can get into the hands of our female colleagues.” —Terri A. Gossard, O.D., M.S., AOA trustee

“Make sure your voice is heard. Make sure we’re at tables where we need to be, that we’re not shy about asking for equity, representation and the ability to lead and make change. We have to encourage our male colleagues to do the same. … We need to make sure we help everybody understand that we all need support but we also need to consciously eliminate bias and promote equity and the role of women in the different optometry settings.” —Lori L. Grover, O.D., Ph.D., AOA trustee

“I would like to see more female practice owners featured in major publications, hear about their struggles and success stories, and have them offer their wisdom to the next generation. … Nominate fellow deserving female colleagues for awards and highlight their achievements.” —Roya Attar, O.D., AOA Leadership Institute committee member

What advice do you have for women optometry students or those just starting out?

“From day one in practice, you have all the tools, knowledge and skills to treat most of what’s in your chair. If it’s within your state’s scope of practice, treat that patient. If you need consultation, turn to an optometrist colleague and learn from what they do and try it by yourself the next time. I think a lot of optometrists are not practicing to the full scope in the state where they live because they’ve gotten into the habit of discomfort with some eye conditions.” —Jacquie M. Bowen, O.D., AOA trustee

“Find a solid mentor, one you are comfortable with asking all the different questions. There are a lot of different aspects to optometry school, and having a mentor who can guide you through that is super helpful. Also, don’t be afraid to join clubs and go out for different positions that may historically not have gone to females. Put yourself out there.” —Gabrielle Magee, American Optometric Student Association secretary

“You have to be confident in the exam room. If you show any sign of confusion or uncertainty, your patient is going to latch onto that and they are going to doubt your credibility and your ability to your job. … And, be proud of where you came from; be proud of your history, and morph that history into your story of why you chose optometry. … Own who you are. Be confident. And academically, be patient with yourself; give yourself grace and time.” —Lotus Schifsky, American Optometric Student Association trustee

“Get involved in your state and professional associations early. Network early. Use your networks as much as you can. You don’t have to go this alone; there are people who have come before you that you stand on the shoulders of, and we’re happy to do that. Reach out. Start building your network and use your networks early. Speak up. Make sure they know your name when you walk into the room.” —Angela Abraham, O.D., AOA Leadership Institute committee member

“Don’t be afraid to be involved, even if you have more of a focus on family. Some people say if you have small children, you probably shouldn’t do this or that, and I disagree with that. I think we’re all smart enough to know what our priorities are, and if we stay focused on that we can certainly do whatever we’d like to do. Don’t be afraid to stand up for yourself. And, know your value.” —Belinda Starkey, O.D., AOA trustee

“Never settle. Get involved. Have a voice and be confident in that voice. That way, you will gain respect not just from other doctors or optometry, but from patients and other professionals, whether that’s a banker, a third-party payer or a policymaker. We all know some days are difficult, so believe in yourself and your abilities, and it will make you a stronger, confident person.” —Teri K. Geist, O.D., AOA trustee

What changes would you like to see in optometry for women?

“I would like to see more opportunities for women from all different backgrounds to be able to become an optometrist. … Also, sometimes women can get boxed in to certain stereotypical roles in optometry [such as] working with pediatrics. … I would like to see that attitude shift a little bit to where you’re an optometrist and your skills are in all areas and not just in a certain area because of your gender.” —Gabrielle Magee, American Optometric Student Association secretary

“One thing that is different in the younger generation of optometrists is that a lot of us are starting to, I don’t want to say reject necessarily, the bimodal nature of gender and gender roles. … We have rejected the stereotypes and do a really good job working together to learn material, to case conference. And I feel like that has provided an environment in which all of us can thrive and grow. When we get out into the working world, hopefully that level of interaction and that level of comfort will still persist. Gender norms are starting to shift.” —Lotus Schifsky, American Optometric Student Association trustee

“I think there is still a significant pay gap in optometry. Price inflation is going up. Cost of living is increasing; student loan debt is increasing. But pay remains the same, and women are often offered wages at lower rates. Women are so talented with high levels of emotional intelligence, but we are often passive about rates. But, fight. It’s OK to stand up and use your voice and say, ‘this isn’t right.’ Someone has to put their foot down, not just for themselves but for everyone else they’re representing.” —Breanne McGhee, O.D., AOA Leadership Institute committee member

“I think it should just be understood that we are an accepted part of the profession, accepted in leadership roles, accepted in whatever aspect of optometry that we choose to be involved in. To have a focus on how things have changed—I’ll be happy to see when that’s a thing of the past, and we don’t have to make it a conversation point.” —Belinda Starkey, O.D., AOA trustee.