June 13, 2018
How primary care doctors of optometry with special interests find success in their optometric niches. 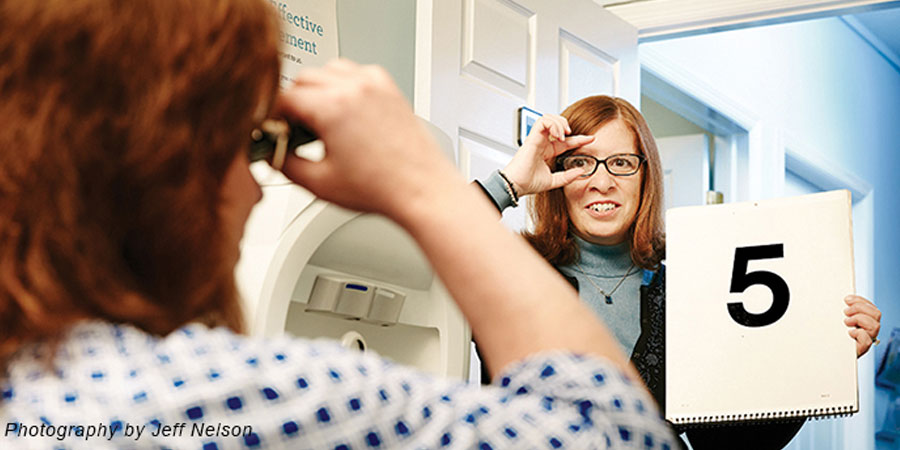 Excerpted from page 39 of the June 2018 edition of AOA Focus.

When Joshua Watt, O.D., was growing up, his parents took him to the eye doctor every year. He was blessed with 20/20 vision and never needed glasses, yet he struggled with reading, often falling asleep after a few minutes.

It wasn't until his second year at Southern College of Optometry, when a professor lectured on the symptoms of binocular vision, that Dr. Watt realized his eyes weren't perfect after all.

"It made a lot of sense as to why I struggled with reading," he says. "I figured out what was going on diagnostically."

The realization that he suffered from convergence insufficiency led Dr. Watt, who was already planning to focus on sports-vision eye care, to expand his practice to include vision therapy. He now owns Impact Vision Therapy, a two-location practice in Colorado.

"I found out that vision therapy is along the same lines as sports," Dr. Watt says. "I could do them both."

Many doctors of optometry have developed practices with special interests in a particular area of care or patient population. They say their focus on contact lenses or vision therapy or pediatric patients gives them the opportunity to provide an important service while also growing their practice. But it takes more than a spark of interest to find success in an optometric niche. These doctors also are astute business people; researching their community demographics, expanding and marketing their expertise and launching themselves to the status of local experts.

Expand your patient base

While some might worry that a niche would shrink their practice, Kerry Beebe, O.D., an owner of Brainerd Eyecare Center in Minnesota until his recent retirement, found the opposite was true. As part of the AOA's original InfantSEE® Committee, a program of Optometry Cares®—The AOA Foundation in which AOA-member doctors provide a no-cost, comprehensive eye and vision assessment for infants within the first year of life, Dr. Beebe taught his younger associate to perform the assessments, and her patient base expanded.

"It allowed her to really build her practice along the pediatric lines," he says. And it made Brainerd Eyecare, which until then primarily focused on geriatric patients, a more well-rounded, primary care practice.

Jennifer Smith Zolman, O.D., who owns Draisin Vision Group in Charleston, South Carolina, says becoming an InfantSEE provider has given her the chance to network with community organizations and to become known as the go-to doctor for pediatric care. It's also a satisfying service to provide, says Dr. Smith Zolman, co-chair of AOA's InfantSEE & Children's Vision Committee.

"When a baby comes into our office, everybody is smiling," Dr. Smith Zolman says.

Some doctors of optometry have no choice about where to base their practice. But if you're starting from scratch—and willing to go anywhere—a good first step is to delve into demographics.

Dr. Watt felt hopeful about the success of a sports-vision practice in his athletically minded community, which is home to an Olympic training center. Nevertheless, he made a list of local athletic training facilities, the sports they focus on and the level of competition. Dr. Watt searched Google and explored census data to learn about the median family income, cost of living and children per household in his central Colorado market. Based on his research—and his experience as a local sports parent—Dr. Watt knew many area families were willing to spend on children's sports.

"The financial means are obviously there," he says. "It's just a matter of tapping into it."

The need is even more apparent for some niches. With perhaps a quarter of children suffering from an undiagnosed vision problem, Dr. Watt says there are more than enough vision therapy patients to go around.

"The biggest thing is that the patients don't know they need it," he says.

So Dr. Watt used Google Maps to create a spreadsheet of every doctor of optometry in a 30-mile radius, noting those who mentioned vision therapy on their website. He targeted those doctors for referrals, as it was clear they were attentive to vision-therapy issues.

Similarly, the need for InfantSEE providers greatly exceeds the number of doctors of optometry who offer the service, Dr. Beebe says. In Minnesota, for instance, just 7% of children age 6 and under have had a comprehensive vision exam, according to the Minnesota Department of Education.

"Children, in general, are an underserved population," he says. "It doesn't matter where you are. There is a need."

Get the word out

Once you know your community needs your services, how do you reach prospective patients?

"I called and sent letters to doctors' offices. Then I followed up with visits," says Maria Santullo Richman, O.D., who treats low-vision patients at Shore Family Eyecare in Manasquan, New Jersey.

She distributed brochures describing her services and explained to providers how she could help their low-vision patients to more easily read mail and manage medications.

"Little by little, those offices would be calling back and saying, 'Can you send us more brochures?'" Dr. Richman says.

Melanie Frogozo, O.D., who runs The Contact Lens Institute of San Antonio, says she targeted cornea—fellowship—trained ophthalmologists in her area, inviting them to lunch or dinner. Dr. Frogozo admits her first networking dinner was awkward. But after providers got to know her, reviewed her curriculum vitae and learned about her approach to disease, "the floodgates opened," she says. Once I got my script down, they understood that I meant business."

Dr. Smith Zolman connected with local hospitals and obstetricians, offering InfantSEE materials to include in new-mother information packets. She searched social media and meetup websites to find new-mom groups and presented them with information from the InfantSEE website. And she educated other groups about InfantSEE, especially those serving the pediatric demographic, such as the United Way and Head Start.

"These organizations usually love it because it's no cost," she says. "It gives them something else to offer to their clientele."

Dr. Richman, who boosted her low-vision patient base by becoming a consultant for the New Jersey Commission for the Blind and Visually Impaired, offered herself as a speaker to low-vision support groups. She educated attendees about low-vision topics, including new techniques that could improve their sight.

"It was a way of bringing hope back to people who had given up hope," Dr. Richman says.

Because of his special interest in the pediatric population, Dr. Watt reached out to local schools. After contacting district communication directors or school employees who knew his work, Dr. Watt was invited to speak at teacher training workshops about how vision therapy could help struggling students. He also told school athletic trainers about his services, noting how he could help with concussion rehabilitation.

"A lot of these patients have seen numerous doctors," she says. "They join these networks to try to get help. Those networks can be really good referral services."

Advertisements work well for some doctors. Dr. Smith Zolman's practice runs a monthly ad in her city's parenting magazine, using the space to highlight its work in InfantSEE, pediatrics and vision therapy.

Amanda Nanasy, O.D., who practices in Pembroke Pines, Florida, with a special interest in sports vision, barters for publicity, offering eye care for Little League teams in exchange for putting her banner in their outfield.

And don't forget to let your own patients know about the services you can provide. Dr. Smith Zolman makes a point of telling her pregnant patients about InfantSEE and offering program materials in the office. Dr. Watt has worked with vision-therapy patients, who also happen to be athletes, on their reading or learning problems, and later told their parents about the benefits of sports-vision training.

Carmen Castellano, O.D., who practices in St. Louis, with a special interest in contact lenses, says his practice isn't shy about opening its doors. The practice holds seminars on contact lens procedures, inviting the public for an evening of education—and sometimes trial fittings. Practice staff are on hand to schedule appointments.

A practice open house, especially after a move or renovation, and offering to host Chamber of Commerce events are other ways to make yourself locally known.

In the year following his graduation, Dr. Watt accumulated some 50 continuing education credits, all in vision therapy. He shared his knowledge, using marketing materials to note what he learned at a recent conference, for instance, helping to brand him as a local expert.

Similarly, Dr. Nanasy aims to educate patients at every visit. She might tell a golfer that polarized sunglasses are great for teeing off but could hamper putting ability.

"It's not a secret," she says. "[But] they probably never heard that before, and now they think you're an expert."

Dr. Nanasy also garnered referrals from a young tennis player with astigmatism after explaining to the girl how her new contacts would stay in place as she moved. "Any doctor who fits lenses can do that," Dr. Nanasy says. "If you don't tell [patients], you can't assume they know what you're doing."

Finally, remember to keep in touch with referring doctors. Dr. Watt lets them know when their patients graduate from vision therapy, often including their success story. After every InfantSEE assessment, Dr. Beebe sent a letter to the patient's pediatrician informing them of the visit.

"It's like building trust in anything," he says. "It just slowly builds."