September 26, 2022
The AOA has created a trove of practice management tools and services that can power practices forward in a profession and health care landscape that increasingly demands doctors practice at their highest levels and creates greater opportunities to develop and empower paraoptometric staff. These days, change is out of necessity. 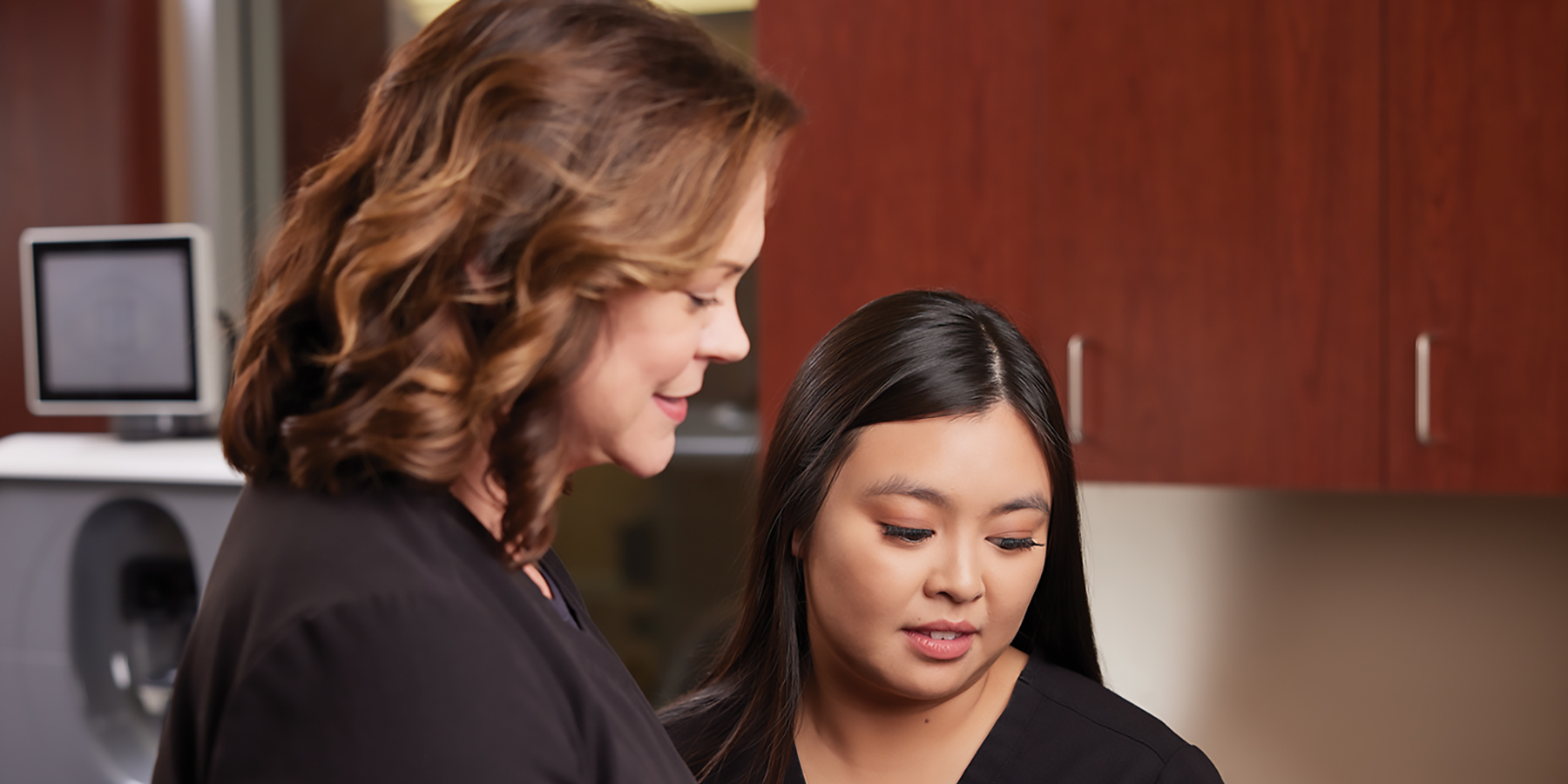 Excerpted from page 24 of the September/October 2022 edition of AOA Focus.

Are we now at another watershed wave for paraoptometrics, led by the AOA, which elevates the profession even more?

“Paraoptometrics are so very critical to the success of the practice and the success of the doctor, and with increased scope comes increased responsibilities for the paras as well,” says Dr. Lighthizer. “Paras take case histories, check vision, perform refractions in some cases, check eye pressures, dilate the eyes and overall are greatly valuable in the efficiency of an optometric practice.

“The same will hold true with laser procedures and office-based surgical procedures,” Dr. Lighthizer adds. “From checking eye pressures to dilating the eyes to preparing surgical trays and instruments, scope expansion will take paraoptometric roles to the next level as well. Scope expansion is beneficial at all levels, from the doctor to the paras, and most importantly to the patients.”

Erlinda Rodriguez, CPO, chair of the AOA’s Paraoptometric Resource Center Committee, cites the many resources available in the AOA’s EyeLearn Professional Development Hub; doctor-paraoptometric courses offered at Optometry’s Meeting®; and other programs in development, including onboarding and a scribing certificate.

Says Rodriguez: “We want the paras trained at their highest level, so they are ready to work with doctors of optometry at the next level or at whatever scope doctors are working at. An educated paraoptometric is also a more committed and more enthusiastic para who wants to learn more, and it’s only going to benefit their practice.”

A doctor’s perspective: Investing in staff

Steven T. Reed, O.D., is a firm believer in investing in staff.

When Dr. Reed opened a private practice in Magee, Mississippi, in 1996, he learned quickly that running it was no one-doctor operation. Mission statements and core values were established—they’re important, too, Dr. Reed adds.

But that, by no means, is all it took to achieve practice success.

“It takes a well-trained, coordinated team to achieve the outcomes of a thriving practice,” Dr. Reed says. “Empowering paraoptometrics benefits both the paras and the doctors, promotes unity through a common mission and can lead to a more positive work environment.

And his staff’s development didn’t end there. He sought out staff members who showed leadership potential and whom he could trust. He eventually hired a practice administrator, office manager and department leads to continually encourage and provide support to the rest of the team.

“Our practices began to grow considerably when I embraced this concept,” says Dr. Reed, whose entire staff is enrolled as AOA associate members, in order to take advantage of the many resources available to member doctors and paraoptometrics.

“With scope victories, staff members often have to refresh or acquire knowledge on the new procedures allowed by law,” he says. “The education provided in the EyeLearn platform can provide an immediate resource for this new level of training. Also, the para certification program is a great way for staff members to have a solid base of knowledge to which to add.”

Dr. Reed doesn’t have the concern that he’s only training a paraoptometric who will leave some day.

“An office will always have people who come and go, but an employee is much more likely to stay if they are in a positive work environment created through support and growth,” he says. “Some doctors are afraid to invest in their staff. They are concerned they’ll spend time, resources and energy only to have the staff member leave or be picked off by another office. The truth is you can’t afford not to invest in your staff. To have a better team, you must have better team members.”

AOA associate membership of paraoptometrics has grown 20%—to 13,196 from 10,999—since 2016. The number of doctors of optometry sponsoring their memberships has jumped nearly 26%.

Like Dr. Reed, Sasha Radford, O.D., asks that every paraoptometric in her practice be associate members and work toward certification. The practice, which is owned by three doctors, has two locations in Illinois and employs 22 paraoptometrics.

“Technicians do special testing as needed with the Oculus Keratography for dry eye disease and anterior segment photos, Spectral and iVue OCT, visual fields and dark adaptation,” she adds. “We have a few techs who scribe for the doctors and a few who perform dry eye treatments with LipiFlow® and intense pulsed light (IPL) therapy.”

And the outcome of all that education? The practice is reaping the benefits, she says.

“We’ve found that certified staff have a greater understanding of the work we do and their role in optometry as a whole,” says Dr. Radford. “After they become certified, they become more intuitive about patients’ and doctors’ needs. Certified staff also serve as role models for new staff and are able to train others with confidence and pride in what they do.”

Paraoptometric perspective: ‘A win-win for everybody’

Sometimes, Loomis says, a doctor at her practice, Tara DeRose, O.D., would talk to her about developments in the legislature, and Loomis’ interest in the debate around the bill grew. She is the administrative practice manager at Mountain Vista Eyecare and Dry Eye Center, which has six doctors of optometry. She has worked there for a dozen years, starting as a scribe.

“I really like what I do,” says Loomis, who has a knack for numbers. “I do all the medical insurance billing, all the accounts receivable for that, collecting, making sure insurance and patients pay us what they owe. I also took over accounts payable.”

Loomis has wondered how Colorado’s scope expansion will transform care in her practice. She calls the act’s passage a “great thing” for patients. “Ultimately, it will save the patient time,” Loomis observes. “We refer a couple of patients out every month for YAGs in particular, and they leave our office and then must make an appointment with another office that is weeks to months out, when it’s some-thing we can take care of right here.

“The new act is a win-win for everybody,” adds Loomis, who wrote a letter to her congressman in support of the bill. “Our doctors very much support us learning. That will continue with the new act.”

Sarah Mays, CPO, is a scribe/technician at Heber Springs Eye Care Center in Arkansas, which underwent its own scope expansion in 2020, after a two-year court battle against an ophthalmology lobbying group.

Now a clinic coordinator, Mays says an expectation was set from the get-go at Heber Springs Eye Care Center.

“Certification was mentioned at my first interview by Dr. (Joe) Sugg and our office manager Lauren,” Mays says. “After it was mentioned and explained, I knew it would be a goal. And when I became a CPO, I gained a tremendous amount of confidence. Patients will ask us if we are certified. It is a great feeling to be able to say I am. In return, the patients get peace of mind in their care.

“I really believe it set me up for success,” says Mays, who relied on AOA resources to prepare for her certification test. The procedures we do now are YAG (laser capsulotomy) and SLT (selective laser trabeculoplasty), and I assist with both. I am excited to see what the future holds with adding more procedures.”

Christina Lounbandith, CPO, has worked at Parenti-Morris Eyecare Center in Rogers, Arkansas, for nearly two years after graduating in 2020 with a biology degree. She had wanted to take a gap year and decide if optometry was in her future.

“Optometry school was always in the back of my mind because of the work life-family life balance,” Lounbandith says. “I applied for a job. During the interview, I met all three doctors in the practice (including AOA Board of Trustee member Belinda R. Starkey, O.D.).”

When she joined the practice, with little experience, Lounbandith was “pretty lost.” No longer.

Dr. Starkey has walked her through everything she needs to know for her job, Lounbandith says. She spends most days scribing for her—learning. For her part, Lounbandith likes the challenge of learning, such as tackling how to take images on the fundus camera or finding out about IPL.

“Dr. Starkey tells me the science behind it all,” says Lounbandith, who also relied on AOA resources for her certification test. “I got more and more interested. I took the CPO certification last November. “I’m glad she takes the time to really help me because, in my case, I want to go to optometry school in November 2023,” she says.

“It’s going to help me in the future.”

Patients’ shady requests: A case study in malpractice and communication

When a trendy request for window tinting doesn’t jibe with your medical judgement—or state requirements—how do doctors legally and ethically navigate this dilemma? Find out in the latest AOA Ethics and Values case study.